A guide to autonomous vehicles and the insurance landscape

Scientists have predicted self-driving technology for almost as long as cars have existed. Today, as autonomous features become widespread, carmakers and consumers alike are excited about the possibilities. However, the new technology raises several important questions, including how it will fit into our current insurance framework.

This article provides context about the state of self-driving cars on the road and its impact on the insurance landscape. Are driverless vehicles cheaper to insure, or is an automated car a product liability?

The Impact of Automated Driving on Liability Insurance

Autonomous technology will have big consequences for both the insurance industry as a whole and individual plans, but its full impact remains to be seen. 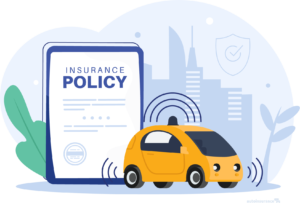 The regulatory environment is still catching up with autonomous technology and insurance. Various levels of government, from federal to local, play a role in regulating self-driving cars. Thus far, the federal Department of Transportation (DoT) has not issued comprehensive rules for insuring an automated vehicle, but rather has imposed voluntary safety guidelines for car manufacturers.1 It’s possible that the DoT will release guidance for insurance providers as well, but that remains to be seen.

With this federal inaction, it has largely been up to individual states and municipalities to impose rules about insuring self-driving cars. According to the National Conference of State Legislatures, 29 states have enacted legislation related to autonomous vehicles so far.2 Insurance requirements vary widely by state: Some have no legislation, while others require consumers and testing companies to have umbrella liability.

For the most part, drivers whose cars utilize automation simply need to follow their state’s auto insurance requirements. This will change as regulations evolve and technology progresses, however.

Underwriting is the way insurance companies evaluate their risk in offering coverage. Traditionally, providers take various factors into account, from an individual’s driving history to their location. Advances in self-driving vehicles may lead underwriters to focus more on the make and model of the car, as the technology becomes more important than the individual sitting in the driver’s seat. In the future, driverless car manufacturers may release a set of risk factors, based on extensive real-world testing, that provide underwriting criteria across all markets.

After an accident, insurance companies determine the actor at fault, which establishes liability. Self-driving cars turn this formula on its head. Some of the most interesting questions around autonomous technology center on liability.

Whose “fault” is it when there is an incident involving a self-driving vehicle? Current laws typically punish human drivers, but what about manufacturers, software developers, and sensor vendors? Are they to blame if a fully autonomous vehicle crashes, rather than the human passenger?

Insurance providers will need to answer these questions as self-driving technology progresses. Today’s autonomous vehicles still require human attention and intervention, meaning a person can still be held liable in the event of a malfunction that leads to an accident. But experts predict that vehicle and software manufacturers will be held liable in at-fault collisions in the future.

Time will tell how this space develops. Though autonomous safety features like collision warnings and emergency brakes promise to reduce accidents, liability coverage will still be necessary for when something goes wrong.

The Future of Car Accidents

What if you get into an accident with an autonomous vehicle? For now, treat it like a normal car accident — don’t leave the scene, document everything, exchange information with the other parties, and report it to your insurance company.

We can only speculate about how car accidents will look in the future. They may occur far less frequently thanks to removal of human error. When they occur, it’s possible that all the relevant information will be reported directly to both the vehicle manufacturer and the insurance company, simplifying the process for everybody involved.

It’s still not clear how autonomous vehicles will impact insurance rates and premiums. Some predict that rates will go up, since the technology that enables automation (sensors, cameras, computers) is expensive to source and repair. But self-driving cars are also expected to lower accident rates, meaning there is less to fix.

These two factors (cost to repair and increased safety) may offset each other, causing rates to remain the same. The price of insuring a self-driving car is ultimately an open question. Today, your auto insurance cost will be the result of all the standard factors, such as mileage, location, and driving history.

Even though we are still waiting for full automation and resulting guidance, most major insurance providers already offer coverage for cars with some level of driving assistance. Here are our reviews of a few companies that cover vehicles with assistive driving features:

Tesla also offers its own insurance product. The company’s pricing structure takes into account automated assistance features as well as individual driving habits, which could improve safety and lower rates. Though it’s only available in California and Texas, this plan may be the best auto insurance for Tesla.

If you own a car with autonomous safety features, it may be a good idea to call insurance providers for a quote, as you could qualify for a reduced rate.

How Do Self-Driving Cars Work?

Driving automation technology is extraordinarily complicated and still presents a challenge to researchers. At the base level, though, self-driving cars work by using an array of sensors to model their surroundings and make split-second decisions about how to respond. 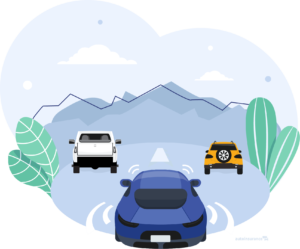 Sensors typically include lidar, GPS, lasers, and camera arrays that cover multiple surfaces of the car. Software then processes these inputs and constructs a 360-degree “view” of the environment around the vehicle.

Next, the computer plots a safe path and directs the car to follow it. This occurs multiple times per millisecond. The software must be impeccable at predicting movement and function in diverse conditions.

For nearly as long as motorized vehicles have existed, researchers have dreamed of a car that could drive itself. As far back as 1925, an inventor drove a radio-controlled car through the streets of Manhattan without anybody at the steering wheel.

The technology behind modern driving automation, neural networks, was first theorized in the early 1990s. Various companies tried to develop the new technology, but Google is typically credited as a leader in self-driving technology with the formation of Waymo in the 2000s. After that, major car manufacturers jumped into the fray, and today the race is on to see which company will break through with truly autonomous technology.

There are various definitions of autonomous technology that impact what we mean when we talk about “self-driving” cars. Not every autonomous feature is available today.

The National Highway Traffic Safety Administration has defined six levels of automation based on a car’s ability to make decisions and act independently.

Level 1 features are now widely available in consumer cars, including adaptive cruise control and land centering. Level 2 is the highest level of automation you can buy commercially. This includes well-known technology like Tesla Autopilot and GM Super Cruise that can control a car under certain conditions.

Most manufacturers are currently developing their own versions of this consumer technology. However, it remains expensive and incomplete, as a driver must be ready to take over at any time. Full automation (Level 3 and above) is not yet available for consumer purchase.

If you use adaptive cruise control, you already use self-driving technology, since your car is controlling acceleration.

Full driving automation has the potential to bring many benefits to consumers. Here are some examples.

The Future of Self-Driving Cars

Currently, researchers are working on the technology to enable levels 3, 4, and 5 of automation. It’s not clear how much longer we have until full automation becomes available, let alone widespread.

When Will Full Automation Become Available?

Business leaders like Elon Musk have been predicting and even marketing Level 3 and higher cars for several years, claiming that the technology is just around the corner. A former U.S. secretary of transportation even said we’d have widespread autonomous cars by 2021,4 clearly an underestimate.

But some experts, including many in the insurance industry, think that full automation is still years away, as many practical and technical problems need to be solved first. Manufacturers will have to contend with these issues before truly autonomous cars can be accepted.

What’s holding the car industry back from full driving automation? 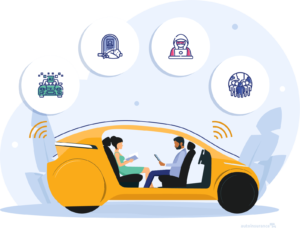 This is a crucial consideration. Recognizing and distinguishing between objects remains a difficult task for computers. Researchers are continuing to improve the artificial intelligence that makes such decisions, but it still needs to be verified before it hits the road for consumers. After all, distinguishing between a cyclist and a parked car is a life-and-death decision for everybody involved.

The first known fatality involving a self-driving car occurred in 2016 with a Tesla in Florida. Since then, cars operated by computers have caused several deaths. Fatalities, and the difficulty determining fault for them, underline the moral challenges that accompany autonomous driving technology.

No computer is impervious to malicious cyberattacks. Given their reliance on computers, self-driving cars are more vulnerable to hacking than other vehicles.

This presents some frightening scenarios. What happens if malicious actors decide to shut off a car’s brakes, for example? Self-driving cars must include robust cybersecurity.

Consumers will have to buy into any shift in technology. Public perception of self-driving cars is mixed: Some drivers can’t wait to have their car drive them everywhere, while others fear giving up control. This may be a limiting factor in adoption of fully autonomous vehicles.

If you’re confused about the state of self-driving cars, you’re not alone. The technology is complex, and so are the questions it raises. But for now, if you buy a car with autonomous features, you can rest assured that you will find an insurance plan to cover your needs. As the technology develops, so will the industry, and you will adapt alongside everybody else.

Learn more about self-driving cars and how they relate to auto insurance.

How do self-driving cars work?

Self-driving cars work by using an array of sensors to model their surroundings and make split-second decisions about how to respond. This may sound simple, but it’s extremely complex, and the technology has not yet achieved true autonomy.

When will self-driving cars become widespread?

Fully autonomous cars will likely become widespread sometime in the next decade, but experts disagree on exactly when. Cars with some level of automation are available for purchase today and increasingly common.

Who is liable in an accident with a self-driving car?

Experts expect that software and vehicle manufacturers will be liable for at-fault collisions that self-driving cars cause. However, regulations are still being determined, and it’s possible that human occupants or owners will be held liable as well.

Do I need auto insurance for self-driving cars?

Yes, you need insurance for self-driving cars. All vehicles need insurance in every state except New Hampshire and Virginia, and autonomous cars are no exception. Insurance is necessary to cover all parties in the event of an accident.

It’s not yet clear whether insurance will be more expensive for self-driving cars. Some pricey cars, like Teslas, are more expensive than average to insure, but once automation becomes more advanced, drivers may see lower premiums as a result of improved safety and collision rates.