Get car insurance in your new state.

As one of the largest and most diverse countries, the United States has an array of communities, from cities to farmland to suburbs. While you can hit 85 mph legally on certain Texas roads, you’ll find yourself in bumper-to-bumper traffic in an urban area like LA, barely exceeding 5 mph. Factors like state laws, population densities, and police presence make driving in the U.S. a wildly variable experience.

We analyzed data from 724,398 auto insurance customer inquiries in 2021, as well as data supplied by the FBI and the U.S. Census Bureau. Using our proprietary data along with national arrest and population data, this report outlines the state of driving in the United States for 2021. Here are our key findings: 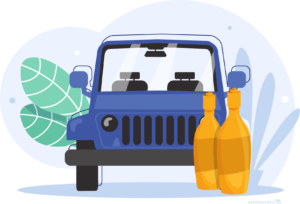 Across the board, crime is more common in cities, which have higher population densities than rural or suburban areas. One exception, however, is DUIs, or driving under the influence. DUIs are actually more common in rural areas than in cities and suburbs.

Why are DUIs so much more common in rural areas, with the lowest numbers for the suburbs? Cities and suburban areas have more public transportation and ride-sharing options, which people can utilize instead of driving drunk. Rural areas also have fewer police, lower DUI enforcement, lower populations, and more peer pressure, according to a study from the National Institutes of Health.2

First, we should acknowledge that the threshold for driving drunk differs by state, as each state has its own standards for blood alcohol concentration (BAC). For example, in New York, where we live, the zero-tolerance level is 0.02, meaning that drivers under 21 can’t have BACs over 0.02 percent. For the rest of us, the BAC level increases to 0.08 percent, with worse penalties for BACs of 0.18 percent.3

The states with the highest percentages of residents who have been arrested for DUIs in the past five years are Idaho, Minnesota, North Dakota, Wyoming, and Alaska at 4 percent each. Compared to the national average of 3 percent, residents of these states are 33 percent more likely to be arrested for DUIs. This information tracks with the FBI data, as these states are largely rural.

Aside from statewide data, we also analyzed data from the top 50 largest metropolitan statistical areas (MSAs) in the U.S. as per the 2019 U.S. Census.

The most common cities for drunk driving arrests are Cleveland, Pittsburgh, Minneapolis/St. Paul, Columbus, and Milwaukee, where 3 percent of drivers have been arrested for DUIs. Notably, all of these cities are in the Midwest, much like the top four states for DUI arrests.

It’s no secret that accidents increase the cost of insurance. Traffic accidents are more common in certain states, bringing up the average cost of car insurance for those at fault.

The most common states for car accidents are Massachusetts, Ohio, and South Carolina, which are tied at 16 percent, compared with the national average of 12 percent. This means residents in these states are 33 percent more likely to have been involved in an at-fault accident in the last five years than the rest of the country.

The states with the lowest accident rates are Hawaii and Michigan at 6 percent each, meaning their residents are half as likely to be involved in car accidents as the rest of the U.S. 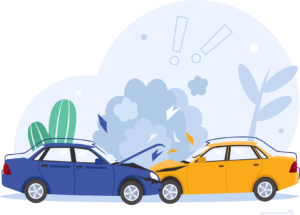 The city with the lowest accident rate was Detroit, where only 5 percent of people have had an at-fault accident in the past five years. That’s 160 percent lower than the rest of the top 50 MSAs.

Tickets are another factor that could increase the cost of auto insurance. Not surprisingly, we found that higher numbers of police lead to more tickets overall. For example, Washington, D.C., has both the highest police presence and the highest ticket rates.

In D.C., 8 percent of licensed drivers had received two or more tickets in the past five years, the highest rate in the country. Aside from D.C., the states with the highest rates of tickets are New York at 7 percent and Maryland at 6 percent. 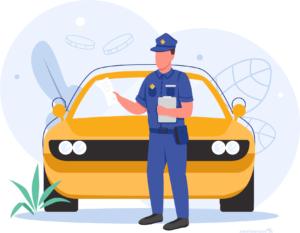 The top cities for tickets are New York City; Washington, D.C.; Chicago; Baltimore; and Denver. Three of these cities — New York, D.C., and Chicago — are in the top 10 most populated cities in the U.S.

You are most likely to get ticketed in New York City, where 7 percent of drivers have had tickets, compared with the 4 percent national average. New Yorkers are 43 percent more likely to get ticketed than drivers living in the rest of the top 50 MSAs. As faithful Brooklyn residents who have forgotten to move their cars for street sweeping more than once, we empathize.

When it comes to auto insurance, your state matters. States have different minimum coverage requirements, population densities, and crime rates, all of which affect the cost of auto insurance. Explore more of our auto insurance research here.

We used proprietary data from Datalot, AutoInsurance.com’s parent company, collected from 724,398 auto insurance inquiries from May to October 2021. We also used third-party data from the U.S. Census, the FBI, the National Institutes of Health, FindLaw, and the Rubinstein Law Offices.