What Is the Minimum Car Insurance in Louisiana?

And is it enough?

Louisiana is known as one of the most expensive states in the country to buy auto insurance. Part of the reason is the state’s car insurance requirements, which include bodily injury and property damage liability. We’ll go over the minimum coverage you need to drive in Louisiana, plus some other state laws you should know about as a licensed driver. 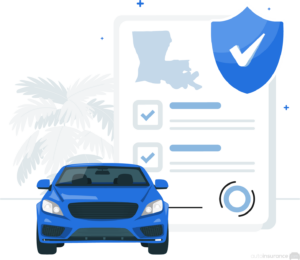 What Is the Minimum Car Insurance in Louisiana?

If you want to learn about car insurance in Louisiana, you’ve come to the right place. You can also check out our auto insurance FAQs.

Is It Enough? More Coverage Options

Despite Louisiana’s exorbitant car insurance rates compared to the rest of the U.S.,1 the minimum requirements aren’t much. Louisiana only requires bodily injury and property damage liability, not uninsured motorist coverage and medical payments coverage, unlike many other states. But if you’re in a bad accident, you may have to pay more than $30,000 for medical costs and more than $25,000 for property damage costs, not to mention lost wages. Take into account all of the costs that could result from an injury or death.

There’s no requirement for comprehensive insurance, which covers damage from everything except cars, or collision insurance, which covers collisions with objects other than cars. The state also doesn’t require uninsured motorist coverage (for when you get into an accident with a driver who lacks insurance) or medical payments coverage (to cover your medical costs in accidents where you are at fault).

Louisiana is a “diminished value” state, meaning that if you get into an accident and can prove that your car is worth less than you paid for it, even with repairs, you can get reimbursed for the diminished value plus the repair costs.2 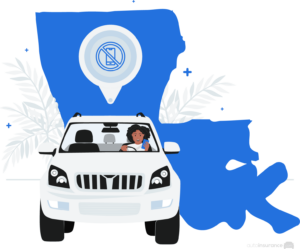 We still recommend getting collision and comprehensive coverage, uninsured motorist coverage, and medical coverage, as Louisiana is an at-fault state, meaning you’ll be responsible for the damages if you’re at fault for an accident. You’ll have to pay your deductible before your insurance will kick in, and if the costs exceed your limits, you’ll have to pay out of pocket. Work with your agent to find the best coverage for premiums you can afford.

It’s estimated that nearly 12 percent of Louisiana drivers are uninsured.3

Penalties for Driving Without Insurance

Think you can get away without having proof of auto insurance? In Louisiana, if you get caught driving without insurance, you could face fines of $500 to $1,000. These are some of the other potential penalties:

Don’t risk it; auto insurance is required in Louisiana (among 48 of the 50 states) for a reason. If you get into an accident, you don’t want to pay out of pocket.

It’s no secret that teens, being new drivers, are more likely to get into accidents than drivers over the age of 25. As such, the driving laws for teens in Louisiana differ from the laws for those over 18 and, in some cases, over 21.

Texting and driving is a huge issue across the country, along with cell phone use and driving in general. In Louisiana, these are the laws for teens when it comes to using cell phones while driving:

Teens don’t get the same types of licenses as everyone else. Rather, they get a Class E (intermediate) license. To receive a Class E license, you must:

The Class E license comes with these restrictions, among others:

To upgrade their licenses from a Class E, teens must get the signature of a custodial parent.6