The New Car Shortage: When Will Prices Drop?

Expect to wait six months to a year for price surges to end.

The COVID-19 pandemic has had many unexpected consequences, like a decrease in the availability of toilet paper or the rise in popularity of sourdough starter. One major consequence that is still with us, however, is the surge in new car pricing, an effect of the new car shortage. We analyzed the reasons why this new car shortage happened and when it will end. Here are our key findings:

When Will the New Car Shortage End?

If you’ve been waiting to go car shopping, you are probably wondering when supply chain issues like the chip shortage will end and bring the average sticker price back down. In other words, when is the best time to buy a car, whether it’s online or from dealer lots?

Analysts predict that new car inventory may not return to pre-pandemic levels until 2023. Other experts estimate earlier, in the second half of 20221. But what caused the short supply in the first place? 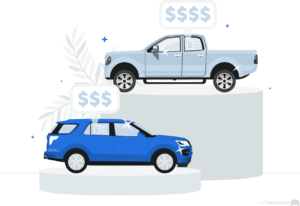 When will the new car shortage end?

Why Is There a New Car Shortage?

U.S. manufacturers suffer from a lack of materials for new cars, particularly for semiconductors. Early in the pandemic, manufacturers canceled semiconductor orders, as people were driving less frequently due to national stay-at-home orders. However, once the economy started to improve and driving became more common, these materials became difficult to access, as they were already allotted to overseas chip suppliers.

That being said, North and South American purchases of semiconductors were on the decline even before the pandemic. From 2015 to 2020, for example, the Americas purchased 30 percent fewer semiconductors, while China purchased 28 percent more. China is the only region on earth whose purchases increased during this time period.

Consistent with the above data on semiconductor sales, China’s capacity to fabricate semiconductors increased by 33 percent during this period, compared to an 18 percent decrease in North America.

The pandemic exacerbated an existing issue: the U.S.’s lack of capacity to buy and fabricate semiconductors, and China’s increasing domination in this space.

Another issue that has prevented the manufacturing of new cars is a labor shortage. In the year 2020 alone, the U.S. lost 578,000 manufacturing jobs and had 500,000 unfilled positions. By 2030, Deloitte estimates that there will be 2.1 million unfilled manufacturing jobs, an increase of over 75 percent in just 10 years4.

According to nearly 80 percent of manufacturers, one of the top challenges in the first quarter of 2022 was “attract[ing] and retaining[ing] a quality workforce.” As a result, nearly 90 percent of manufacturers surveyed had unfilled positions that they struggled to fill with qualified workers5. Data from the Bureau of Labor Statistics confirms that transportation manufacturing employment rates are still not at pre-pandemic levels6.

Effects of the New Car Shortage 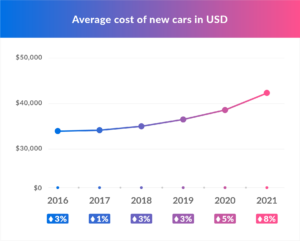 A basic economic principle is scarcity. The fewer of something there are, the more valuable that something will be. With fewer new cars and high demand, the average price for new cars increased, much to the dismay of car buyers. Data from the National Automobile Dealers Association shows an increase in the average price of new cars:

From 2016 to 2019, the years preceding the pandemic, new car prices rose only 6 percent. But from 2020 to 2021 alone, they rose by 8 percent, leading fewer people to be able to buy cars, and less of a selection of vehicle inventory for those that could. 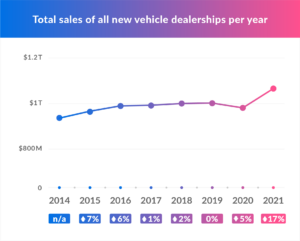 Despite the fact that they are selling fewer cars, new car salespeople are making more money for their dealerships resulting in record profits. While exact data differs from organization to organization, all of the data shows fewer cars sold, yet greater profits. 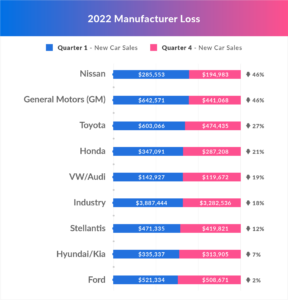 In 2022 so far, the rate of new vehicles sold in the U.S. has decreased by 11 percent according to J.D. Power. This was true for every manufacturer, with Nissan taking the biggest loss in the number of vehicles sold in 2021:

That being said, because of the increase in new car prices, dealerships made more in 2021 than ever before, with a 17 percent year-over-year increase9.

In sum, the new car shortage is bad for consumers, who pay higher prices for the same inventory, but it’s good for dealerships, who sell fewer cars yet make more money.

We conducted our research by analyzing data from multiple government and third-party sources: