45 Percent of Teen Drivers Text Behind the Wheel Every Week 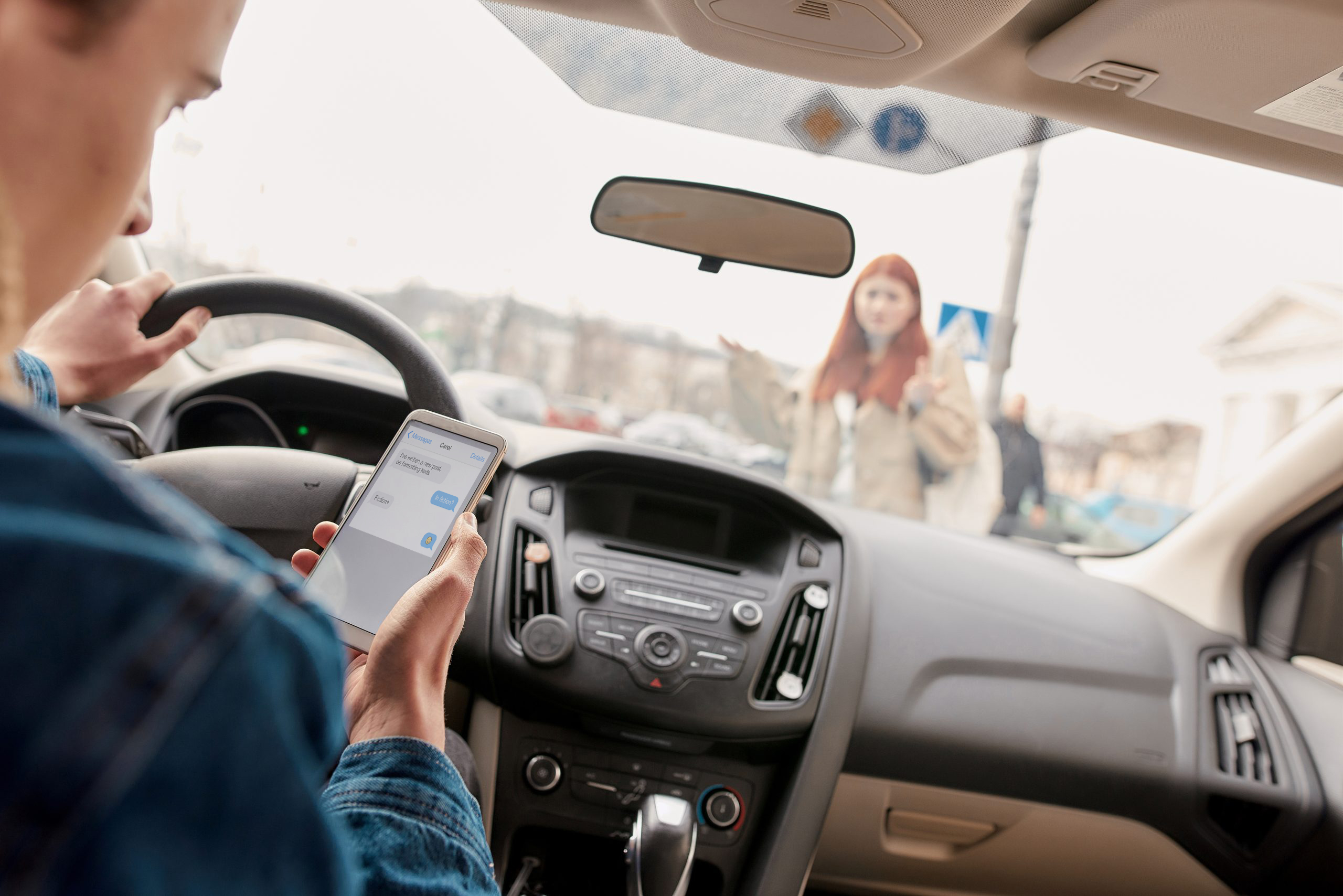 Find the Best Insurance for Your Teen.

Let our Perfect Policy Connectors shop the market for you!

Though teen drivers are much more likely than adults to have deadly crashes, the parents of teen drivers expressed more concern about technology distractions and driving skills.

Perhaps the only thing more daunting than being a young motorist on U.S. roads is parenting a teen driver who’s just learning how to operate a vehicle.

The earliest days of driving can be the most dangerous, as drivers ages 16 to 19 are involved in accidents at a rate nearly three times higher than those 20 and older.1 Additionally, automobile crashes injure more than 250,000 teens annually and rank as the second-leading cause of death for the age group.2

Beyond inexperience, teens must contend with mounting distractions and the consequences of irresponsible behavior. Poor driving habits and choices at a young age can impact health, finances, and insurance options for a lifetime. It’s no wonder parents of teen drivers worry. To address the most pressing concerns among teen drivers and their parents, we conducted a study of both groups to see how their worries compared. Here are some of our key findings:

Parents Don’t Have the Same Confidence as Their Teen Drivers

Much of the world requires drivers to be at least 18 years old, but most American states license motorists at 16 or younger, per teen driving laws. As a result, there are 12 million young drivers on U.S. roads,3 all learning with their lives on the line.

We discovered that although teen motorists lack extensive driving experience, they suffer no shortage of confidence. Three-fourths of teens harbor concerns about driving, whereas 93 percent of parents worry about their teens’ driving skills. 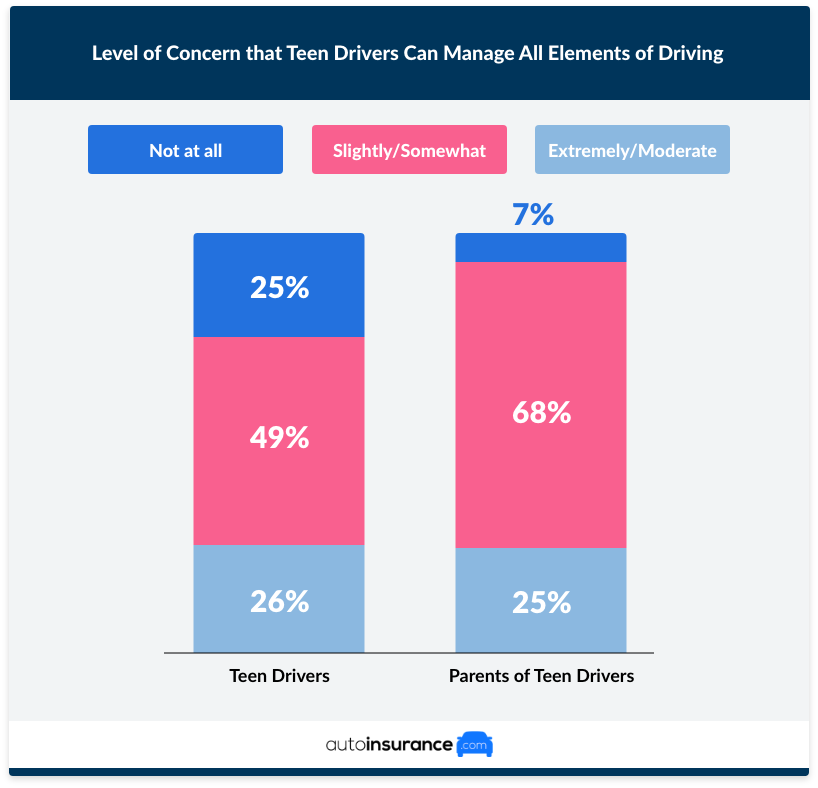 Parents and teens are equally confident in most basic motoring requirements: residential driving, turn signal use, maintaining a safe distance, and obeying state laws, though notable discrepancies emerged regarding other individual abilities.

Parents are far more concerned about their teen children being aware of other vehicles, driving on busy highways, and handling inclement weather like natural disasters.

Difference in Confidence in Driving Skills: Parents vs. Teens

Teens can only improve their skills with practice, and it can be daunting to watch an inexperienced driver take to the highways. But there are prudent steps parents can take to prepare their young drivers for the road.

As their children reach driving age, parents should evaluate their children’s driving readiness and have discussions about what it will look like to begin driving. Licensed parents should also help their children practice their driving skills; teens driving with a passenger age 35 or older reduced their accident risk by 62 percent.4 Most states have laws regarding supervised driving practice and minimum ages for passengers for new drivers.

The Most Dangerous Driving Distractions for Teens

Driving distractions for teens are particularly dangerous when navigating roadways at high speeds. Whether singing, chatting on the phone, eating, or checking digital screens, modern society supplies numerous diversions that can endanger teens who are learning to drive.

We asked parents and teens to identify the top driving distractions for young drivers and found the groups largely agreed when ranking the most dangerous disturbances. However, parents tended to demonstrate more anxiety than their teen drivers.

Top Distractions for Teen Drivers, According to Teens and Their Parents

Parents of teen drivers were more likely than teens to fret about distracting passengers, and these concerns were well founded. Studies show that teen driving behavior is more dangerous when underage passengers ride along. Teens driving with just one passenger under the age of 21 increases the risk of a fatal accident by 44 percent. Two young passengers double this risk, and transporting three or more young passengers without an adult present quadruples the likelihood of a deadly crash.

Similarly, 53 percent of parents ranked phones as one of the top driving distractions for teens (compared to 45 percent of teen drivers). Looking at a phone while driving greatly escalates the risk of getting into an at-fault accident. NHTSA data suggests that the chances for an accident go up sixfold when teens use their phone while driving, and the risk multiplies 23 times while driving and texting at the same time.

Despite these dangers, many teen drivers are easily distracted behind the wheel. More than half of the teen drivers in our study admitted eating or drinking while driving, nearly 40 percent talked on the phone, and 55 percent admitted to looking at their screens. 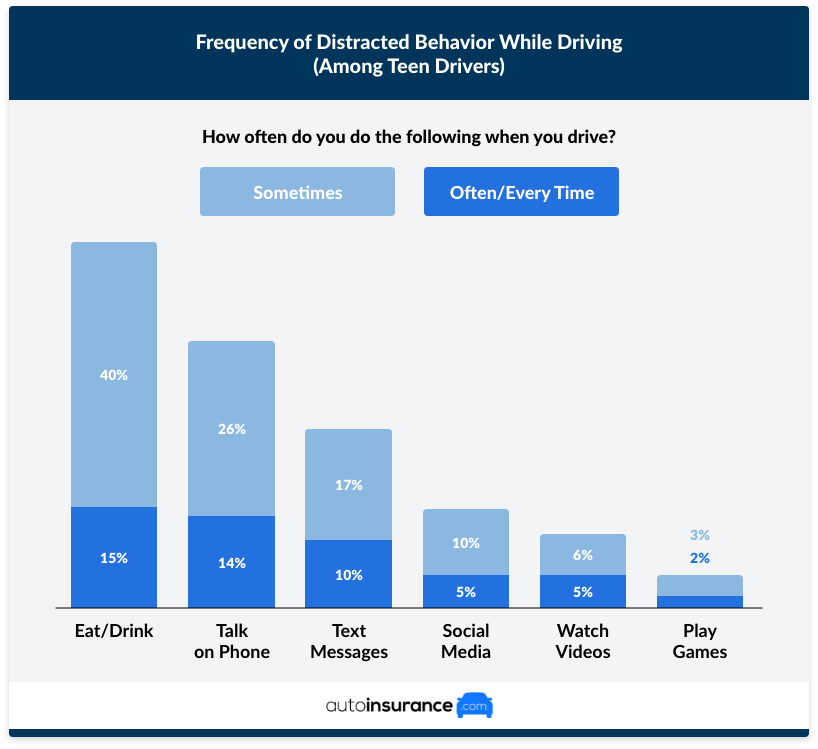 Interacting with phones is second nature to many teens, so they may not always be aware when they’re doing it. In fact, 45 percent of teen drivers in our study admitted to texting while driving in the last week.

So how can parents tackle such an insidious problem? Here are a few tips:

Teen Drivers and the Rules of the Road

While some view teenage rebellion as a normal milestone in the transition to adulthood, a rebellious attitude can be dangerous while behind the wheel. Young drivers who ignore rules or appraise risk inaccurately may speed excessively, fail to use seat belts, or drive under the influence, often to disastrous results.

Recent roadway statistics from NHTSA show that teen speeding contributed to 27 percent of fatal teen driving accidents.  We found that 78 percent of parents are concerned about their teen children speeding.

These fears appear well founded: 61 percent of teen drivers reported that they speed at least some of the time, and 23 percent said they speed often or always.

Most modern cars have alarms that remind drivers to fasten their seat belts, and 49 states require seat belt use, but many motorists still choose to drive unrestrained.

The NHTSA reported that compared to other drivers, teens are least likely to wear seat belts. Moreover, they found that nearly half of teen drivers killed behind the wheel were unbuckled at the time of their crashes.

We found that an overwhelming majority of teens wear seat belts almost every time they drive, though parents believe the rate is even higher.

Two in three teen drivers felt confident that they could handle a traffic stop correctly, but teens were far more concerned than their parents about what could transpire after being pulled over. 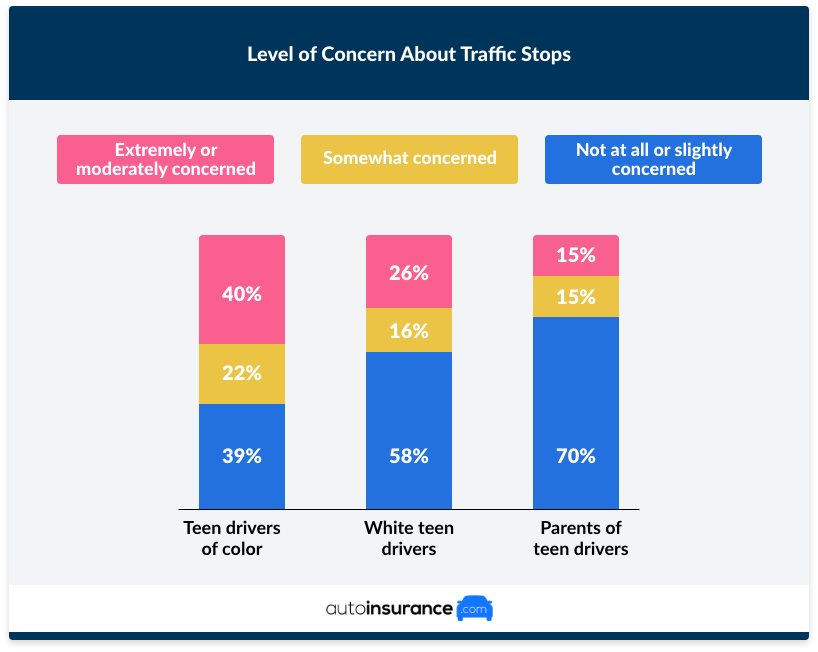 Parents should seek to understand their teen’s worries and create opportunities for candid discussion. They can work together to find solutions that may ease anxieties, such as installing dashboard cameras. Parents can also help teens understand their legal rights during traffic stops and discuss the best ways to handle a traffic stop.5

Teenager safety is every parent’s paramount concern, but young drivers’ behavior impacts finances and insurance. Our study found that 85 percent of parents had added teen drivers to their auto policies, with a median premium increase of $100 per month.

Due to their inexperience and propensity for accidents, teen drivers cost more to insure. This is especially true for teens with poor driving records, though younger motorists with clean records, supplemental training, good grades, and proactive monitoring can often qualify for teen driver discounts. 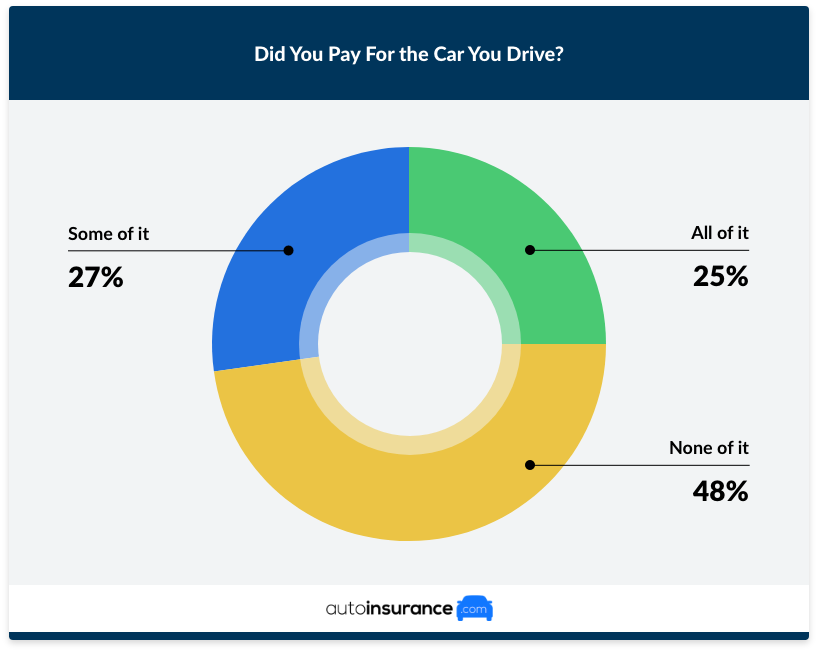 Contributing to the cost of an automobile and insurance can be a valuable tool for encouraging safe driving habits and financial responsibility among young drivers. Teens bearing some burden of their bills may be more aware of the financial consequences of poor driving behaviors. They may be incentivized to protect their cars with more defensive driving when they’re behind the wheel.

Parenthood requires the gradual release of control as children age, but letting go is difficult in the face of fear. Learning to drive is a rite of passage that comes with a myriad of dangers, such as lack of experience, distractions, and dangerous behavior, all of which increase the risk of injury and death for teen motorists.

But through responsible behavior, open communication, and technology, parents and teens can get on the same page, thus keeping young drivers safer and insurance costs manageable.

In May 2022, AutoInsurance.com conducted an online survey of 445 Americans about their driving concerns for teenage motorists. Of the respondents, 195 were parents of at least one child age 18 or younger with a license or permit to drive. The other 250 were teens ages 16 to 18 with either a permit or a license to drive. The samples were proportionally representative of genders and ethnicities compared to the general population. Of the teen drivers in the study, 50 percent were white, 16 percent were Hispanic or Latina/o, 14 percent were Black, 8 percent preferred not to disclose, 6 percent were Asian, 1 percent were Arab, and 5 percent were multiracial or another ethnicity not listed. We did not collect data on parents’ ethnicities.

We also used third-party data from organizations such as the Insurance Institute for Highway Safety, the Centers for Disease Control and Prevention, NHTSA, Traffic Injury Prevention from Taylor & Francis, and the American Civil Liberties Union.