Data from the National Highway Traffic Safety Administration revealed that teens driving Oldsmobiles, Chryslers, or Pontiacs were most likely to be injured in crashes.

According to the U.S. Centers for Disease Control (CDC), seven teenagers are killed in car crashes nearly every day.1 That adds up to more than 2,400 teenagers lost each year, in addition to many more who are seriously injured in crashes.

While we know that teen drivers are at a higher risk of accidents than older, more experienced drivers, are there factors that make some teens more likely than others to be involved in a crash?

In order to find out, we analyzed data on drivers aged 16-19 from the Crash Report Sampling System (CRSS) from the National Highway Traffic Safety Administration (NHTSA). The data reveal which teens drivers are at greatest risk for crashes and what cars are most often involved in crashes.

Males More Likely to Crash Than Other Teens

According to the Insurance Institute for Highway Safety (IIHS), teen drivers between the ages of 16 and 19 are three times as likely to be involved in a deadly crash versus drivers aged 20 or older.2 Among all teen drivers, however, crashes are most frequent among 19-year-olds and boys, according to our analysis of CRSS data. 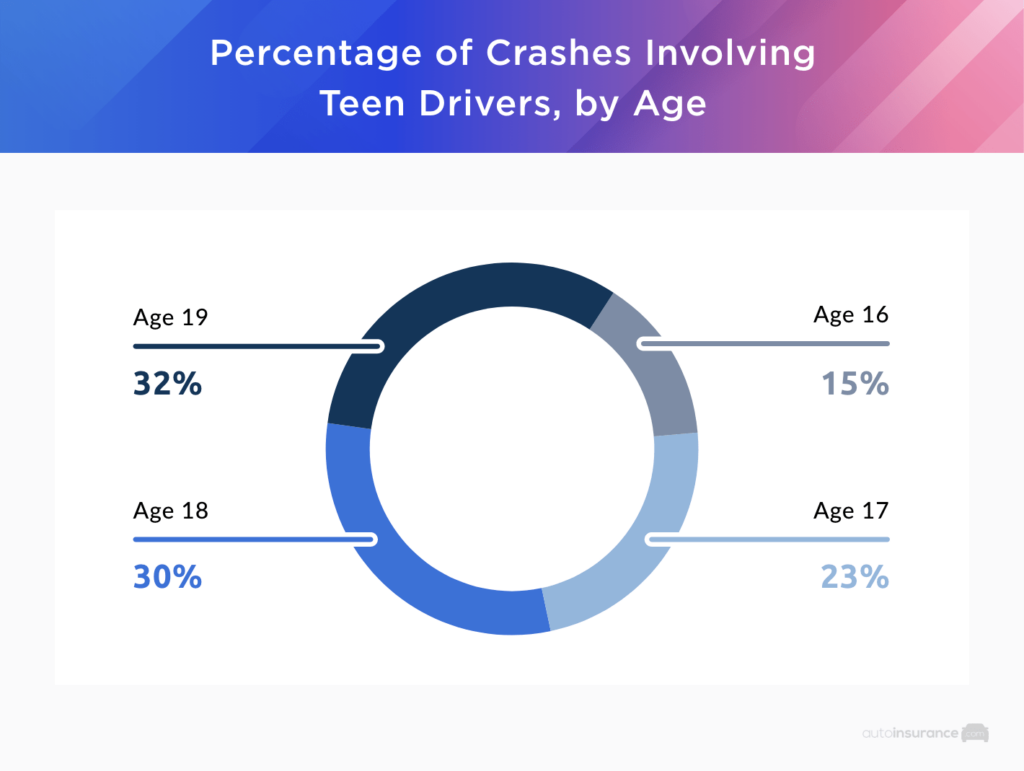 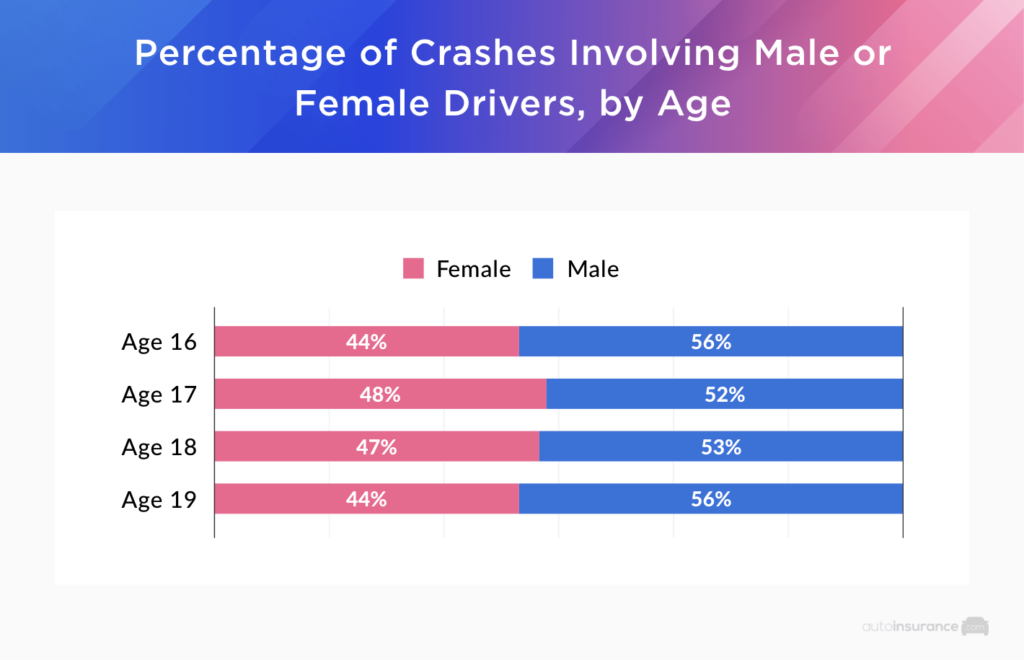 Young male drivers may be more at risk for crashes because they participate more frequently in aggressive driving compared to young female drivers. When teens drive with their peers, these chances are even higher: aggressive driving occurs three times as often when a girl is riding in the car with a male teen driver than when teen boys are driving alone.3 This risk is also slightly higher when there’s another boy in the car with a male driver. These figures show that teenage boys may tend to show off or attempt to look cool in front of their peers while driving, both of which can lead to an accident.

Both adult and teen men regularly pay more for car insurance than women. They tend to pose a higher risk for insurance companies than women because of their higher fatality rates, higher DUI rates, and greater likelihood of being stopped by police for traffic violations.

Teen Crashes Most Likely to Occur in the Afternoon Hours

The CRSS data revealed that the most frequent time for teen driver accidents is between 2:00 and 6:00 pm. This is commonly the time that teenage drivers are leaving school, and it coincides with peak hours for commuters driving home from work. 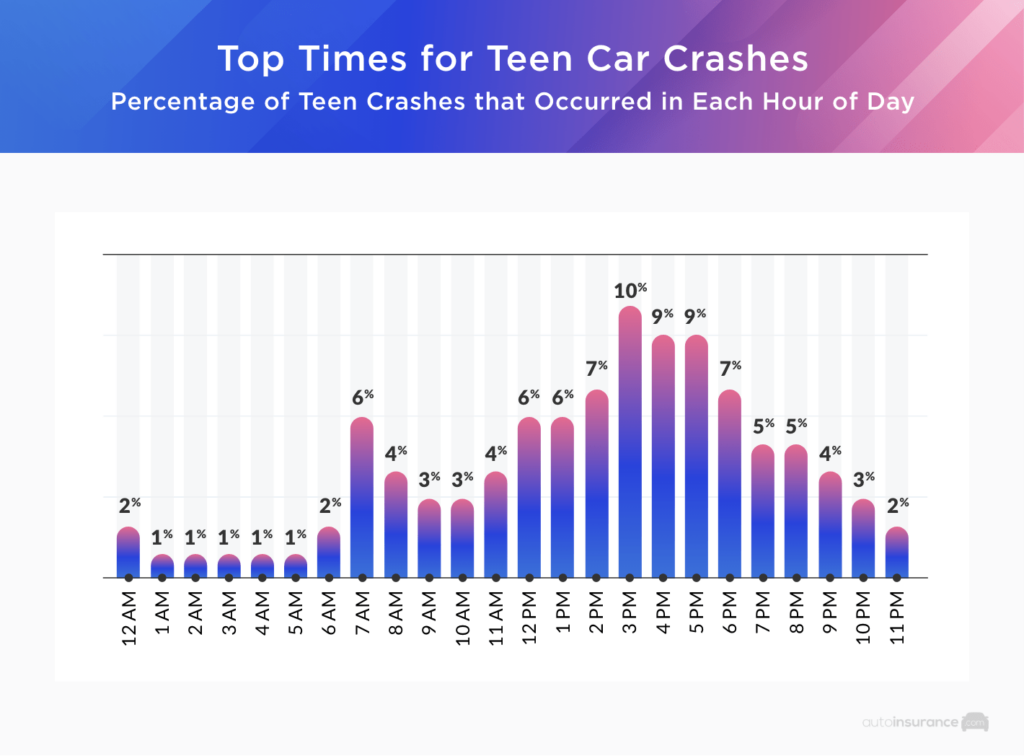 When roadways are more congested during rush hours, there are more distractions and obstacles for young drivers to navigate. Here are a few simple ways to ensure a safer drive on the way to or from school and work:

Distracted Driving is a Top Concern for Teens

Distracted driving is a major problem for drivers of all ages, but today’s teen drivers have additional distractions vying for their attention that generations past did not have to face. In fact, the CRSS data showed that 35 percent of all teen driver crashes were front-to-rear (rear-ending) crashes,4 which are often caused by distractions or following too closely.

Whether they are stressed about school performance or dealing with issues at home, teenagers can have trouble focusing on what’s going on in front of them. When technology and friends are added into the mix, the distractions only become more severe.

A recent Autoinsurance.com study found that 45 percent of teens had texted while driving within the last week. Though texting while driving is common, it can greatly increase the likelihood of crashing. Drivers of all ages should remember that there’s nothing happening on social media or text that is as important as staying focused and staying alive.

Having passengers in the vehicle can also create distractions and crashes. The AAA Foundation for Traffic Safety Study found that the likelihood of crashes among 16- and 17-year-old drivers:

For each additional passenger under age 21 that rides with a young driver, the risk of an accident increases significantly. Does this mean that teenagers shouldn’t be allowed to have passengers? This is a question that only parents are able to answer, in accordance with the laws in their state.

Not only is it illegal for teens to drink alcohol, it also impairs all of the skills they need to drive safely. While adults aged 21 or older can drive after drinking if they are under the legal blood alcohol content (BAC) limit, it’s against the law for teens to have any amount of alcohol in their systems.

Though alcohol and drugs are not factors in most teen driver crashes, some drivers are likelier than others to drive under the influence. CRSS data revealed that male teenagers are about twice as likely to be involved in an alcohol- or drug-related crash than teen female drivers.

Though alcohol-related crashes were slightly more common than drug-related incidents among teen drivers, the number of drug-related crashes have increased in recent years as marijuana laws have relaxed in some parts of the country. Overall, nearly one in 10 people ages 16-20 has admitted to driving under the influence of marijuana,6 and between 2000 and 2018, the percentage of all car crash deaths involving marijuana more than doubled.7

While many people believe marijuana is less dangerous than alcohol, it can still have an effect on the bodily functions people need to drive safely, such as vision, alertness, and coordination. This is why it’s essential for parents and educators to advise teens on the risk of driving under the influence of any mind-altering substances.

According to the CDC, automobile crashes injure more than 250,000 teens each year and are the second leading cause of death for this age group. While we found that 74 percent of teens had no reported injuries after accidents, more than a quarter of teen crashes do lead to injuries, which is significant.

Of course, drivers’ skills are paramount to safety on the road, but vehicles must also be evaluated to keep passengers as safe as possible.

Every car undergoes extensive crash testing and rating from both the NHTSA and Insurance Institute for Highway Safety. These crash tests look for the possibility of injuries and any structural weakness of the car that could pose threats to passengers. Before purchasing any vehicle, it’s best to examine these crash test ratings to ensure vehicle safety.

According to the data we analyzed, there are five car brands that seem to have a higher instance of injuries following a teen car crash. The brand associated with the greatest likelihood of crash injuries was Oldsmobile. About 17 percent of teens who crashed while driving an Oldsmobile had injuries. Chrysler, Pontiac, Chevrolet and Honda followed closely behind Oldsmobile.

Three of the top five brands on this list are or were owned by General Motors: Oldsmobile, Pontiac, and Chevrolet. However, it’s important to note that Oldsmobile and Pontiac cars have been discontinued since 2004 and 2010, respectively. This means that the models still on the road today are older and likely have fewer technological and safety advances than cars produced more recently.

Some cars are considered unsafe because of structural deficiencies, while older cars may have fewer technologies such as lane-keeping assist or blind spot detection that could help reduce crashes. Manufacturer negligence can lead to safety problems. For instance, Chrysler had to pay for failing to recall unsafe cars in 2015.8 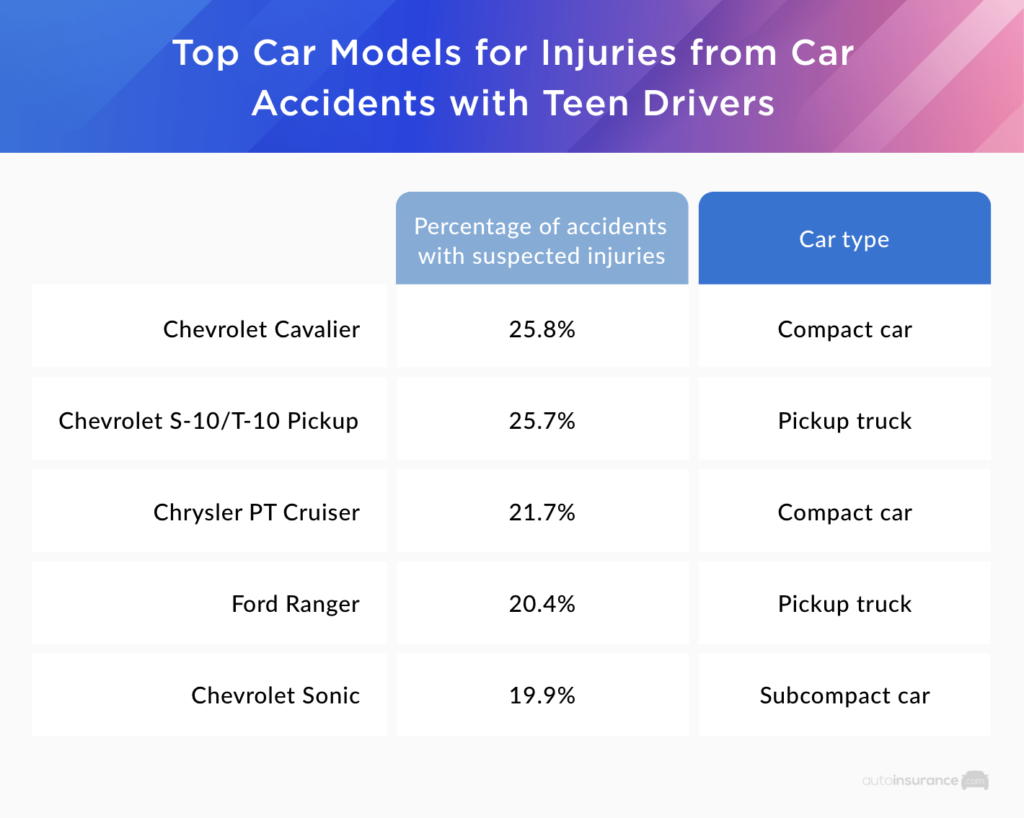 Three of the five car models that were associated with injuries in teen driver crashes were compact or subcompact cars. Though small cars are attractive due to their fuel efficiency and overall costs, they aren’t the safest cars. Unfortunately, according to the IIHS, drivers are more likely to die in a compact car than a larger car. Large SUVs had the lowest overall death rate in recent studies from the Insurance Institute for Highway Safety.

On the other hand, there are several car brands that seem to do a better job of protecting occupants than others. According to CRSS data, 83 percent of teens involved in crashes with Audi cars had no apparent injuries. Around 81 percent of those driving Volvos or Cadillacs (another General Motors company) also had no reported injuries from their crashes. 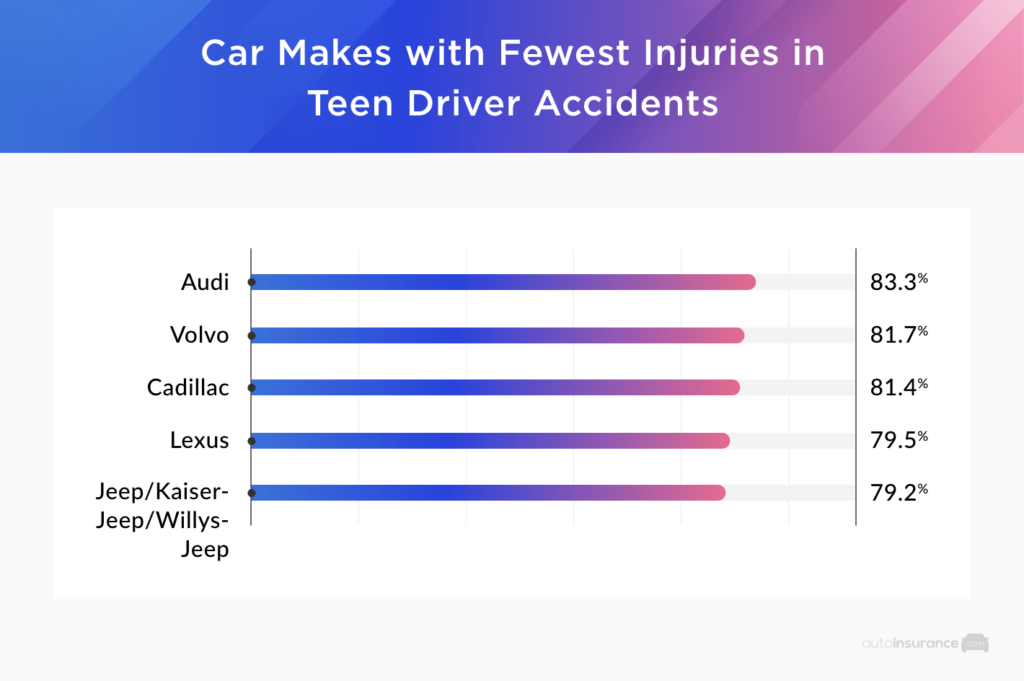 All of these top-rated brands have earned either five-star NHTSA ratings on multiple models or have cars that are IIHS Top Safety Picks. These brands are also committed to supplying the latest driver-assist technology. However, you still have to do your research among various models, as every manufacturer can have some in their offerings that don’t measure up. 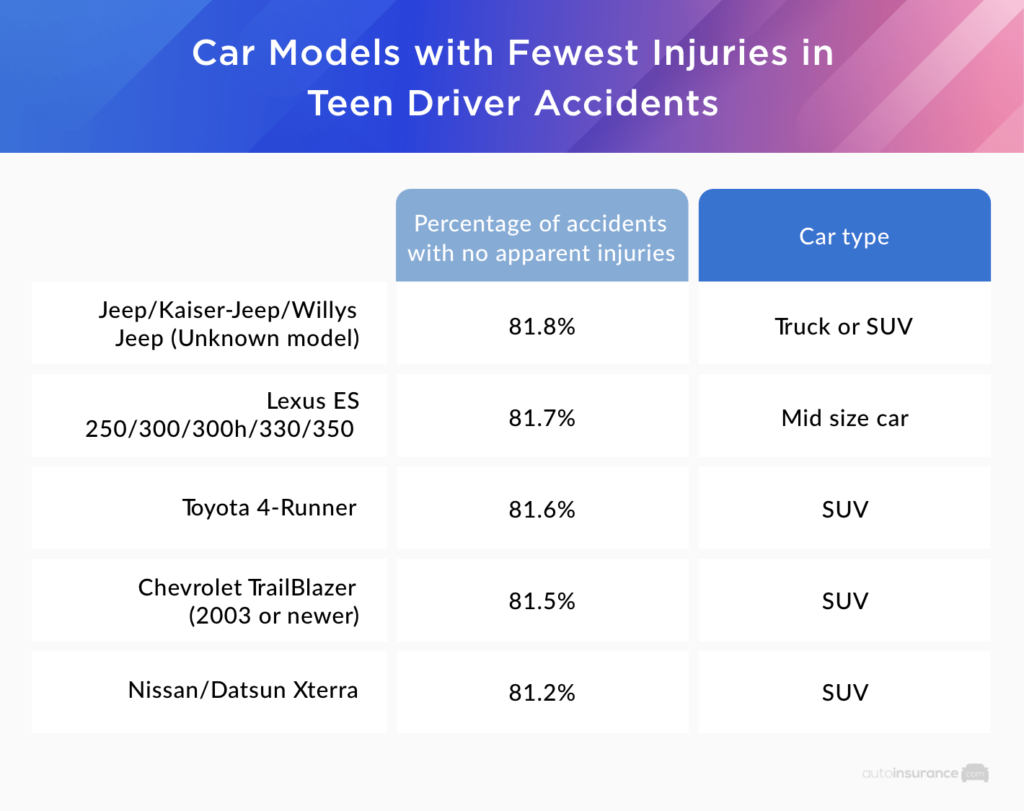 Most of the five models with fewest injuries were SUVs, which means they have a larger size and are higher from the ground. Research shows these cars tend to be safer than smaller cars in a crash. This may make them more popular with teen drivers and their parents.

It’s vitally important for parents of teen drivers to equip them with the necessary tools to avoid accidents and injury. Whether they choose to enroll them in a defensive driving course or set up a secondary driving system to limit distractions, such as those provided in many newer cars, parents can help protect their kids on the road. Knowing the biggest pitfalls can help them devise a plan that protects their children on the road.

We analyzed data from the Crash Report Sampling System (CRSS) from the United States Department of Transportation (DoT) National Highway Traffic Safety Administration (NHTSA). Our analysis focused on crashes that involved drivers aged 16-19, and included incidents that occurred between 2016-2020. This data set is representative of crashes that occur across the U.S., but it only includes those accidents that involved police. According to the NHTSA, the CRSS is a “sample of police-reported crashes involving all types of motor vehicles, pedestrians, and cyclists, ranging from property-damage-only crashes to those that result in fatalities.”