Black People Are 93% More Likely to Be Carjacking Victims

As inflation and unemployment rise, carjackings are becoming more common. But some people are much more at risk of falling victim to this crime than others. If you’re Black or Hispanic, live in a metropolitan statistical area (MSA), and make less than $75,000 a year, you’re a lot more likely to be carjacked than your white, suburban, affluent counterparts. 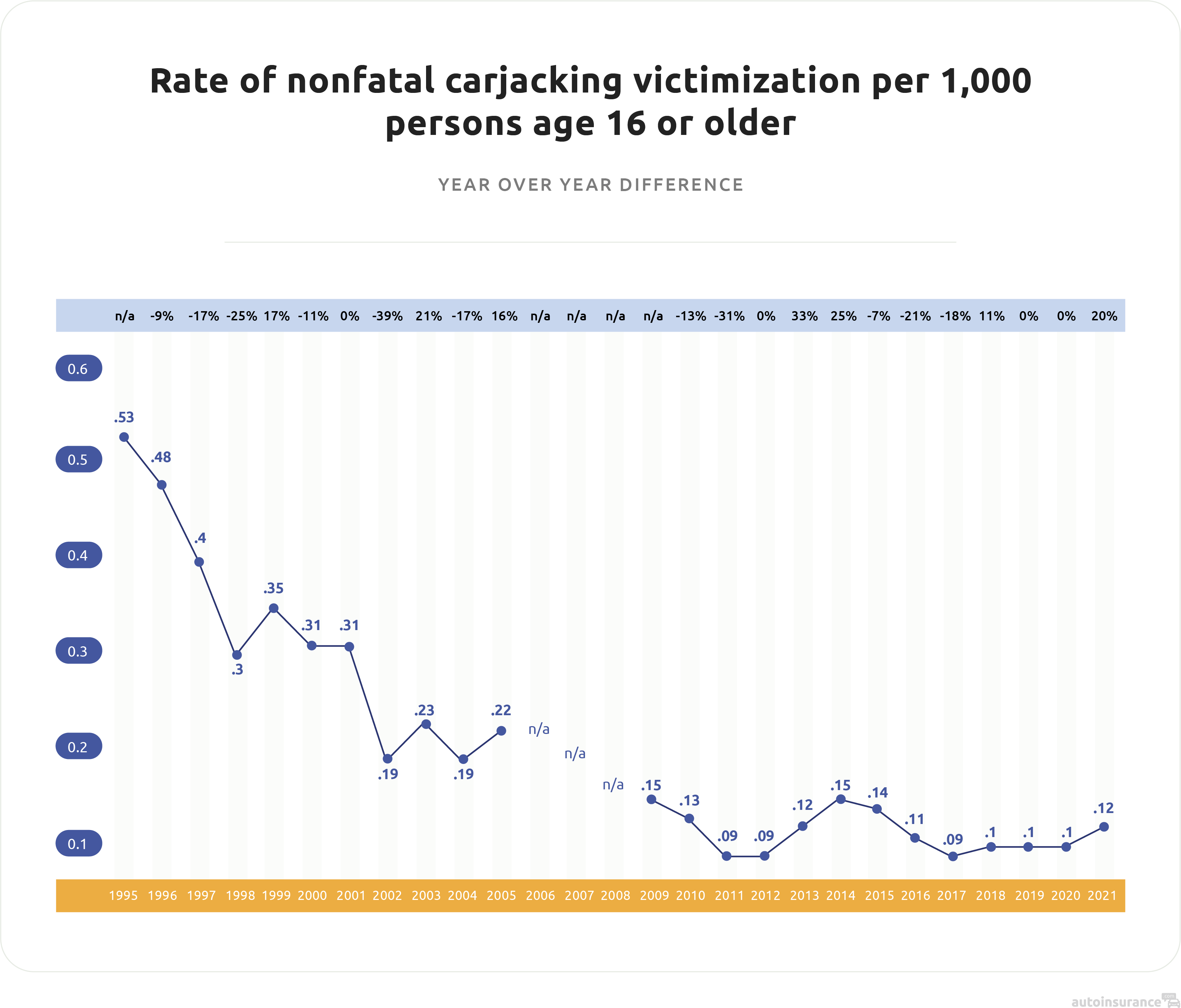 The Most Common Victims

Depending on where you live, what your race and household income are, and a slew of other factors, some people are much more likely to be carjacked than others.

Men and women are equally likely to be carjacked, a crime that falls into the larger category of auto theft. Is this what equal rights advocates wanted when they said they wanted gender equality? Something tells us no. 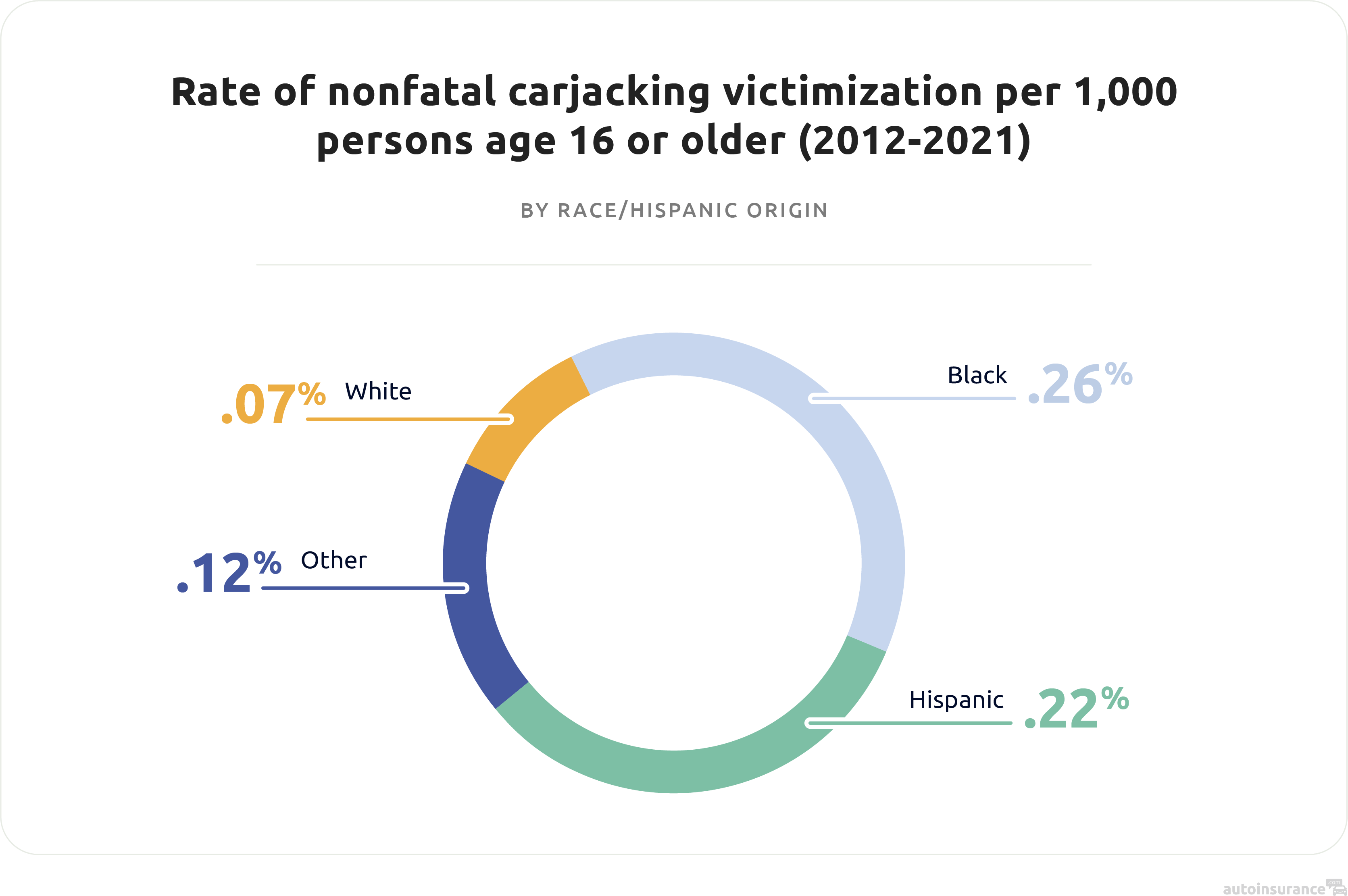 Young people are the most common victims of carjacking, with the highest rates occurring between the ages of 20 and 34. Senior drivers 65 and older are the least likely to experience this crime. 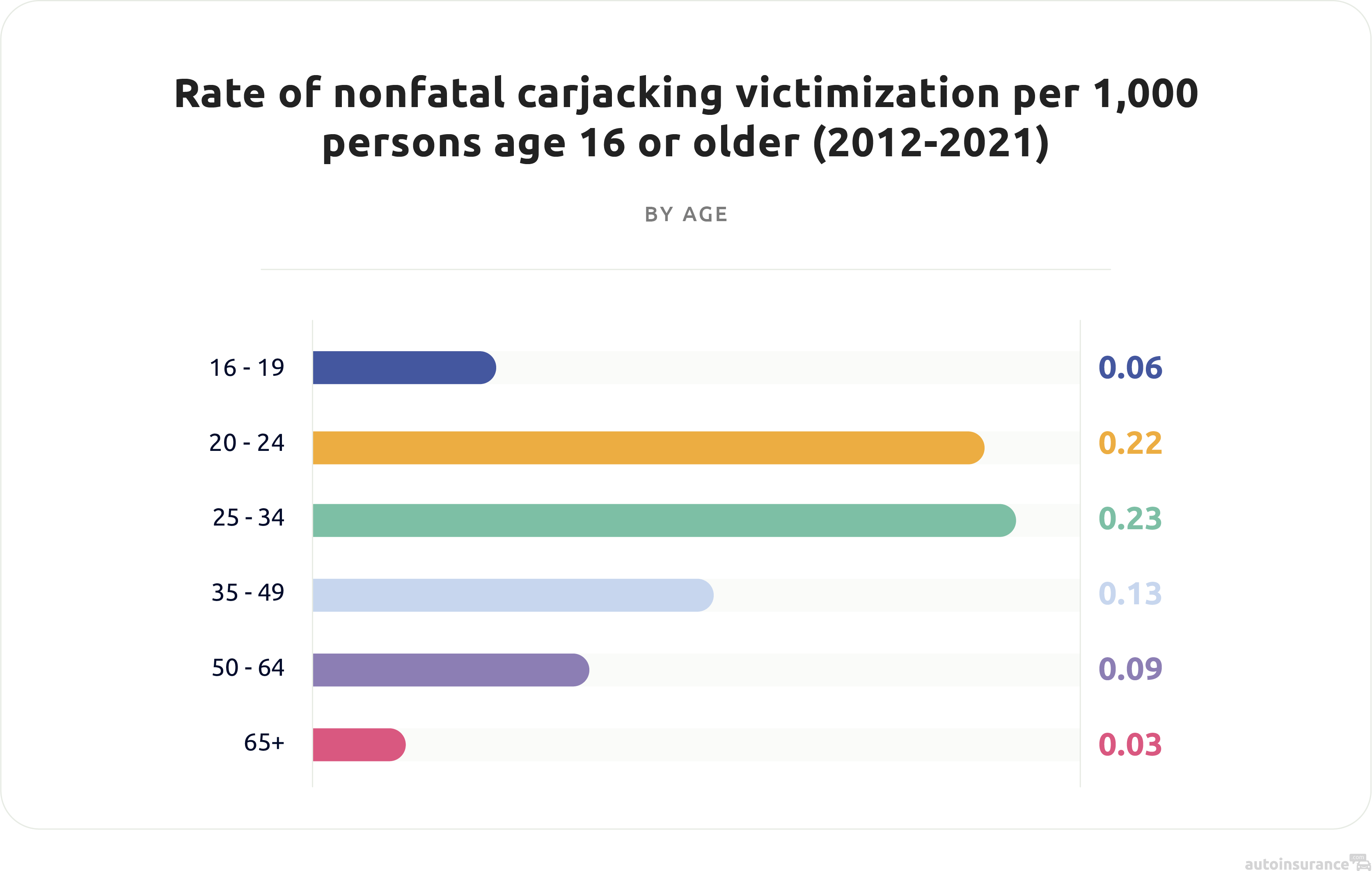 You know about the tax benefits of marriage, but did you also know married people are the least likely to be carjacked? Unfortunately, if you’re single, divorced, or separated, you’re more likely, on average, to experience carjacking. 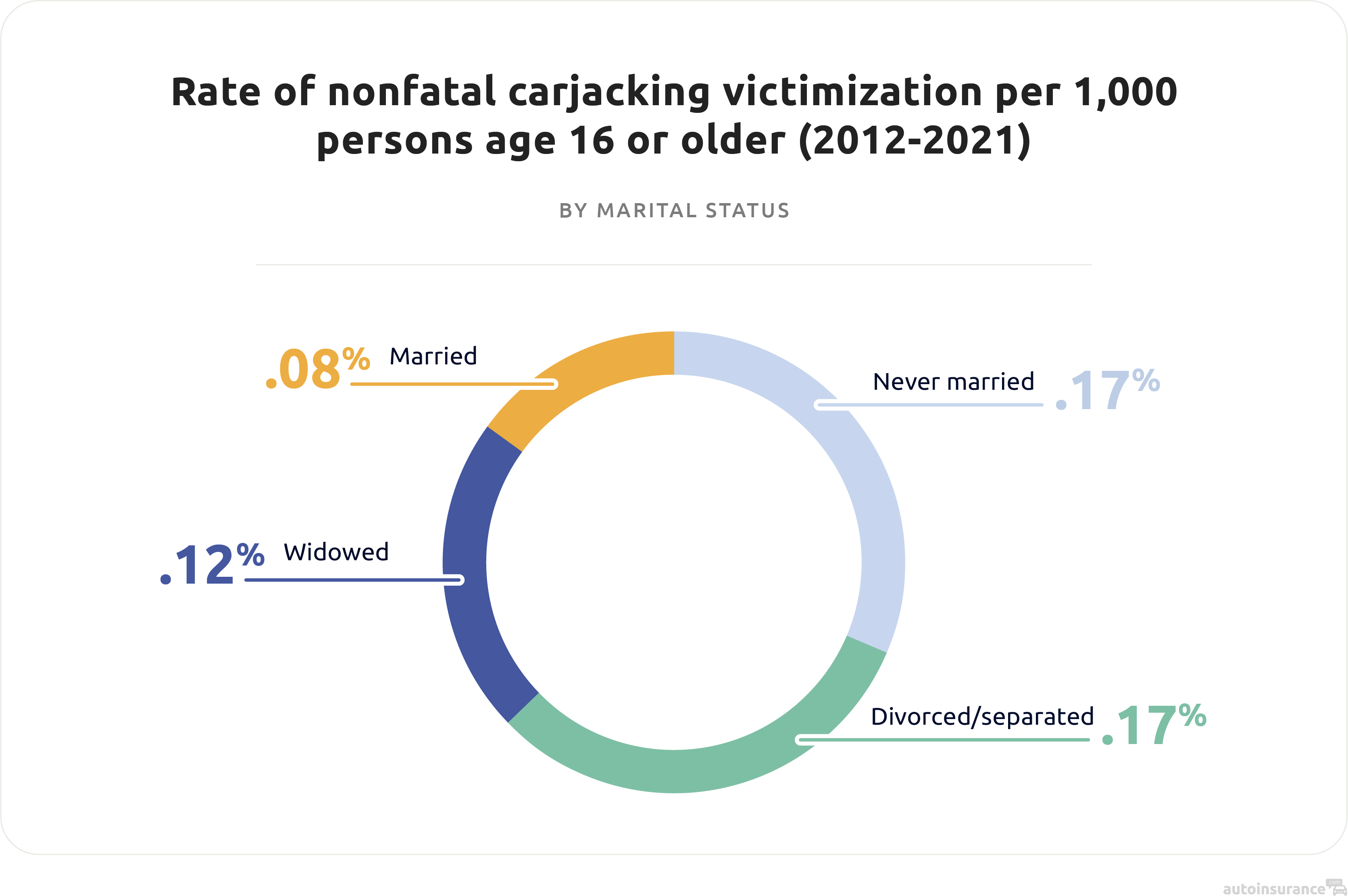 Those with household incomes of more than $75,000 have carjacking victimization rates less than a third of those who make less than $75,000. 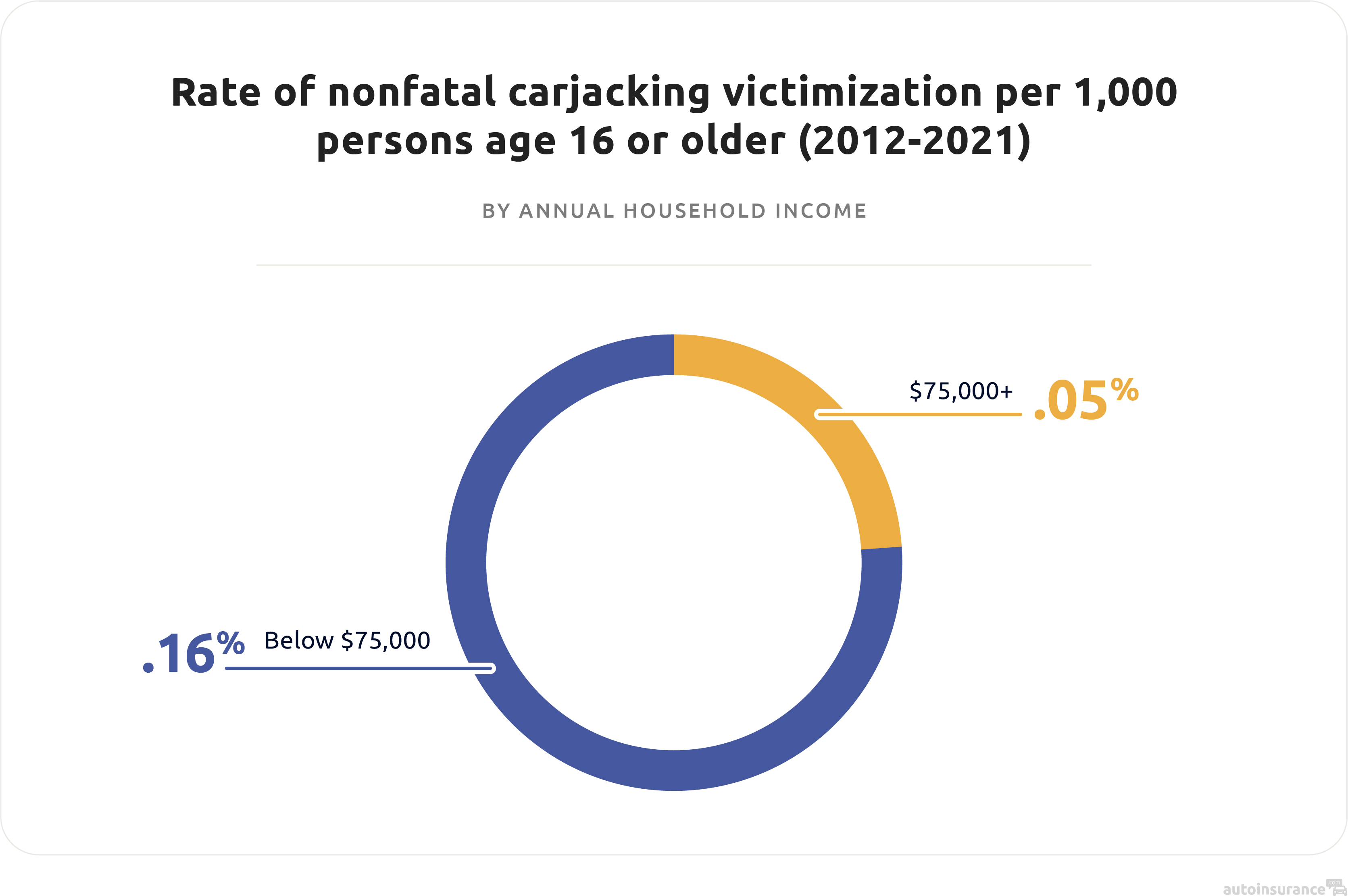 Putting aside the demographics of the victims, the most common type of carjacking includes one victim, occurs near the victim’s home in an MSA, and involves weapons. The good news? In nearly three-quarters of carjackings, the offenders don’t injure the victims, and the drivers are able to recover their cars 55 percent of the time. Hey, it’s not a huge majority, but we’ll take it!

The Number of Victims

Nine out of 10 carjackings involve only one victim, which proves the old adage of strength in numbers.

A whopping 97 percent of carjacking victims live in MSAs — urban areas. The more central to a city you live, the more likely carjacking becomes. 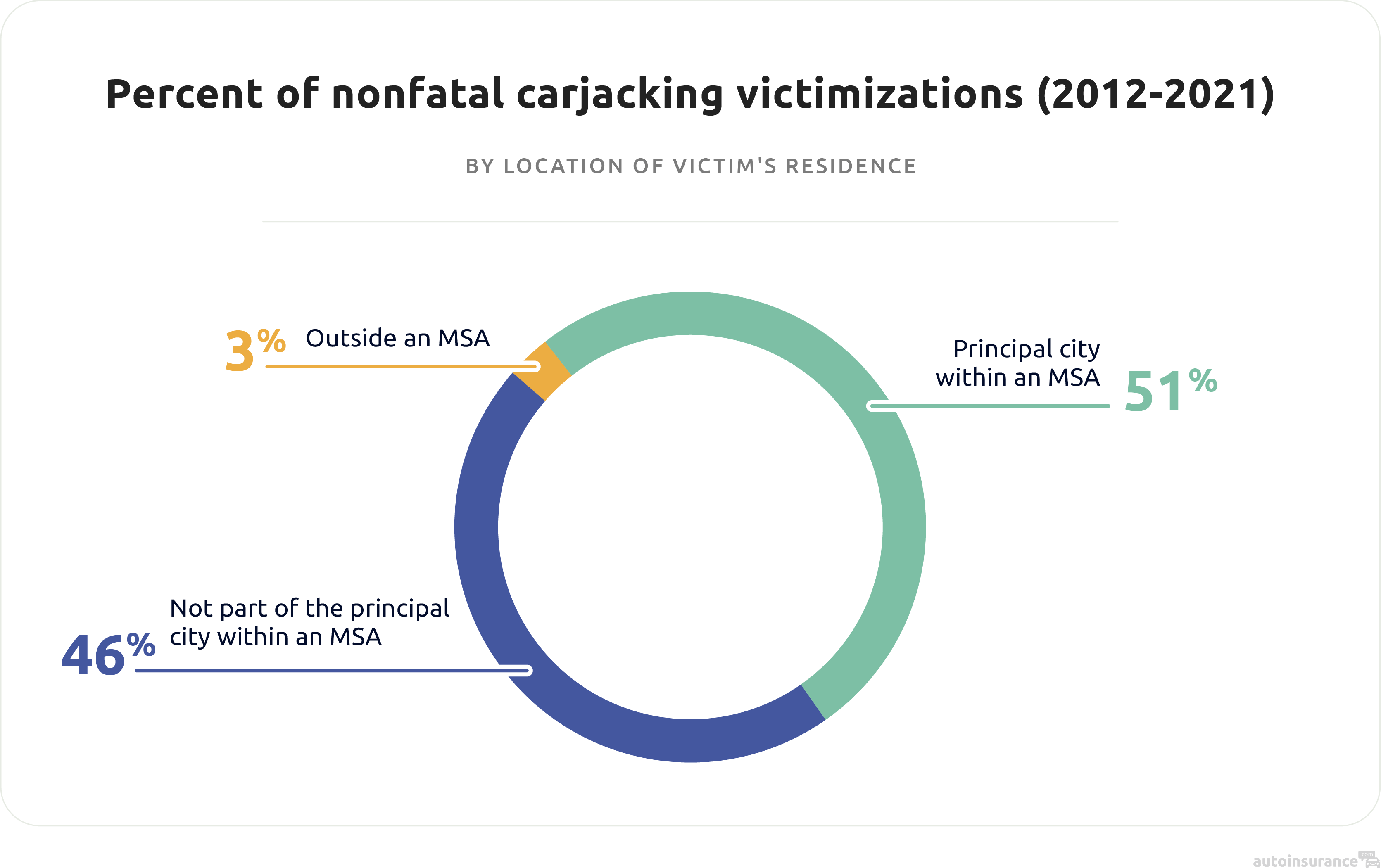 And unfortunately, the plurality of nonfatal carjackings occur at or near a victim’s home in almost 4 out of 10 cases. Beware of dark streets, parking garages, and other commercial locations. 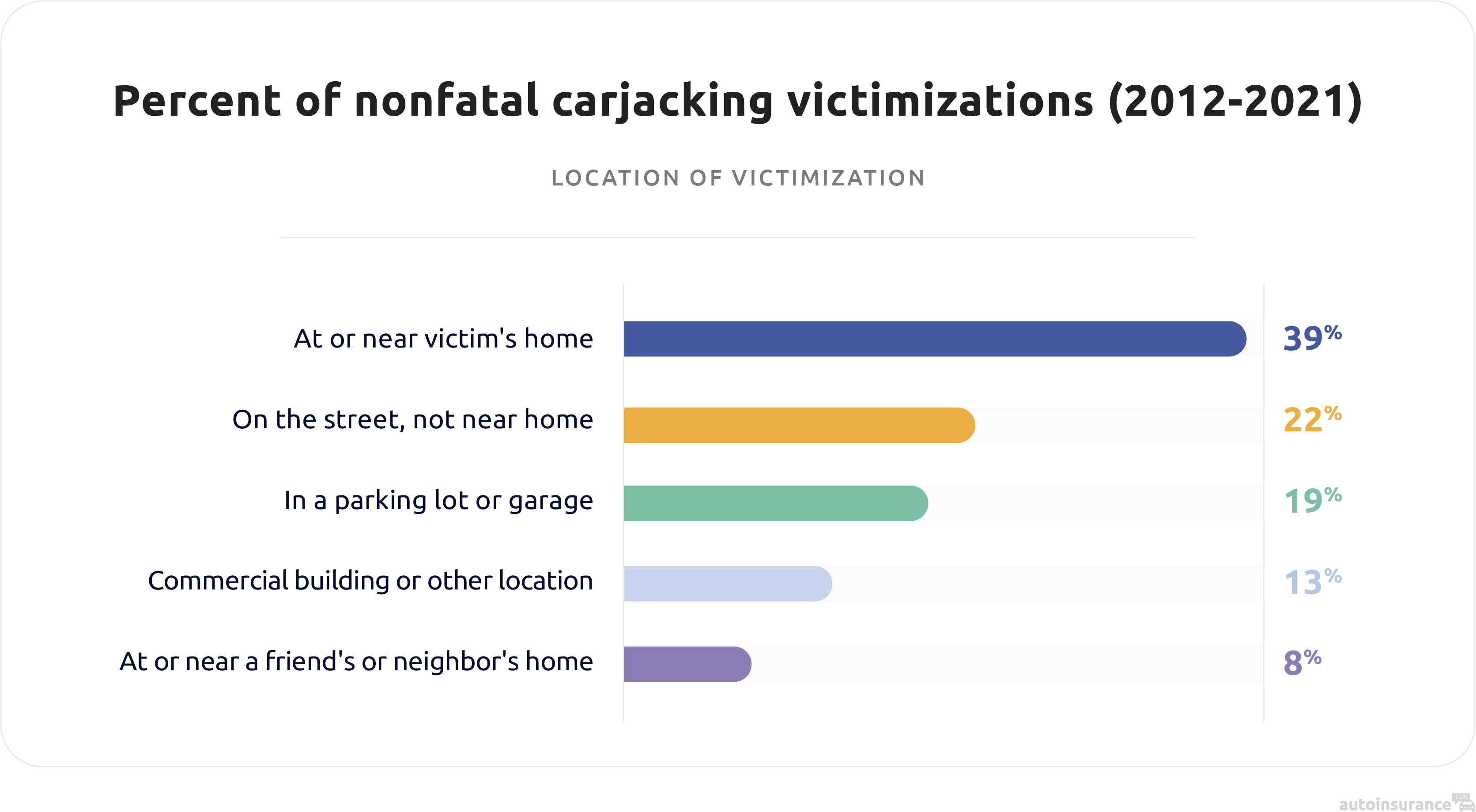 Thirty percent of drivers in the U.S. use their car’s built-in navigation systems, according to the 2022 Statista Global Consumer Survey.1 This sector is growing; in 2018, the U.S. GPS tracking device market was worth $1.57 billion and is expected to reach $3.38 billion by 2025.2 So while, historically, 55 percent of carjacked vehicles are recovered, we expect that number to increase as GPS tracking becomes a more common feature that car manufacturers include. 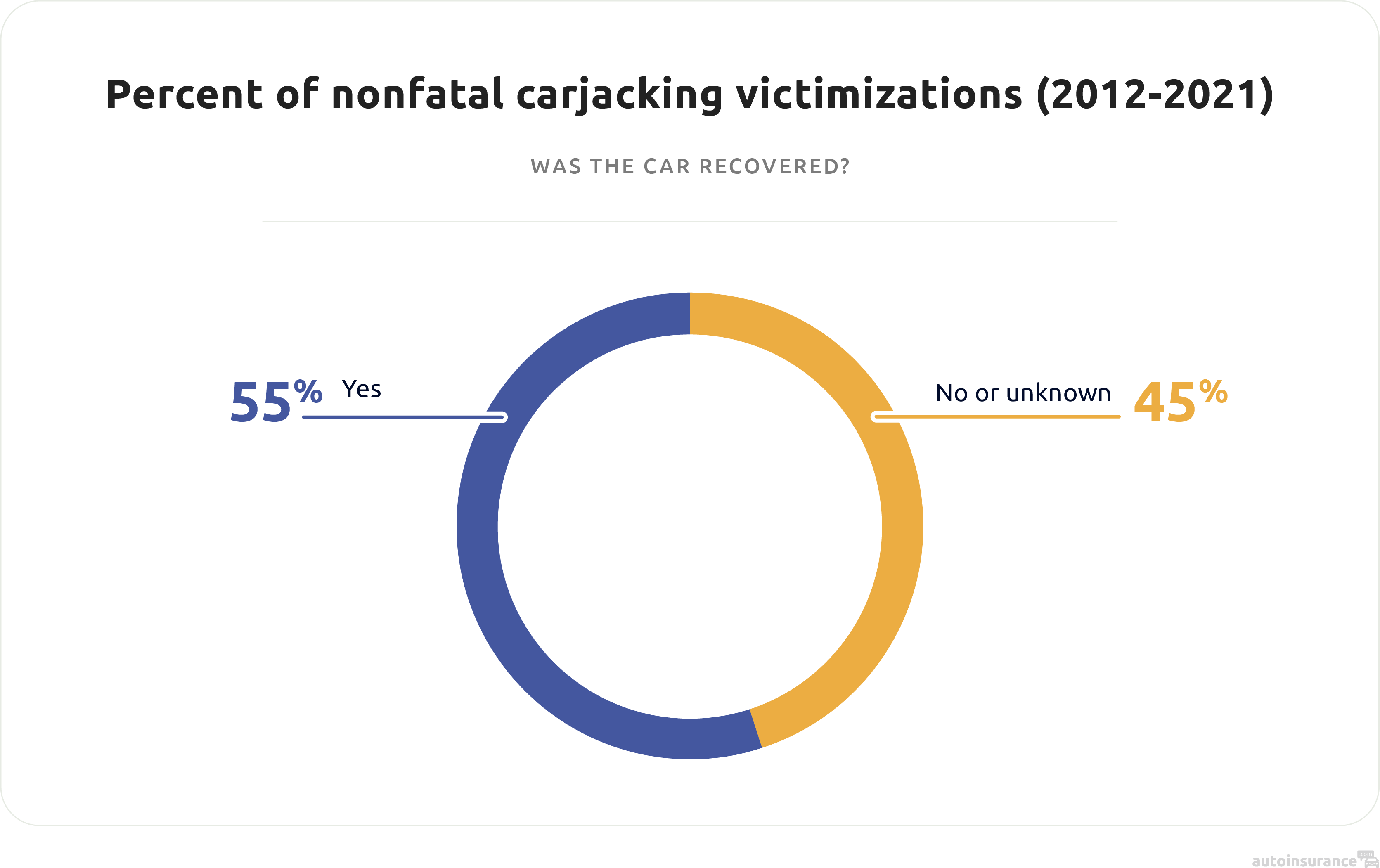 In nearly 6 out of 10 carjackings, the offender is armed, typically with a firearm. However, as you’ll see from the data further down, three-quarters of the time, the victim manages to avoid any injuries. 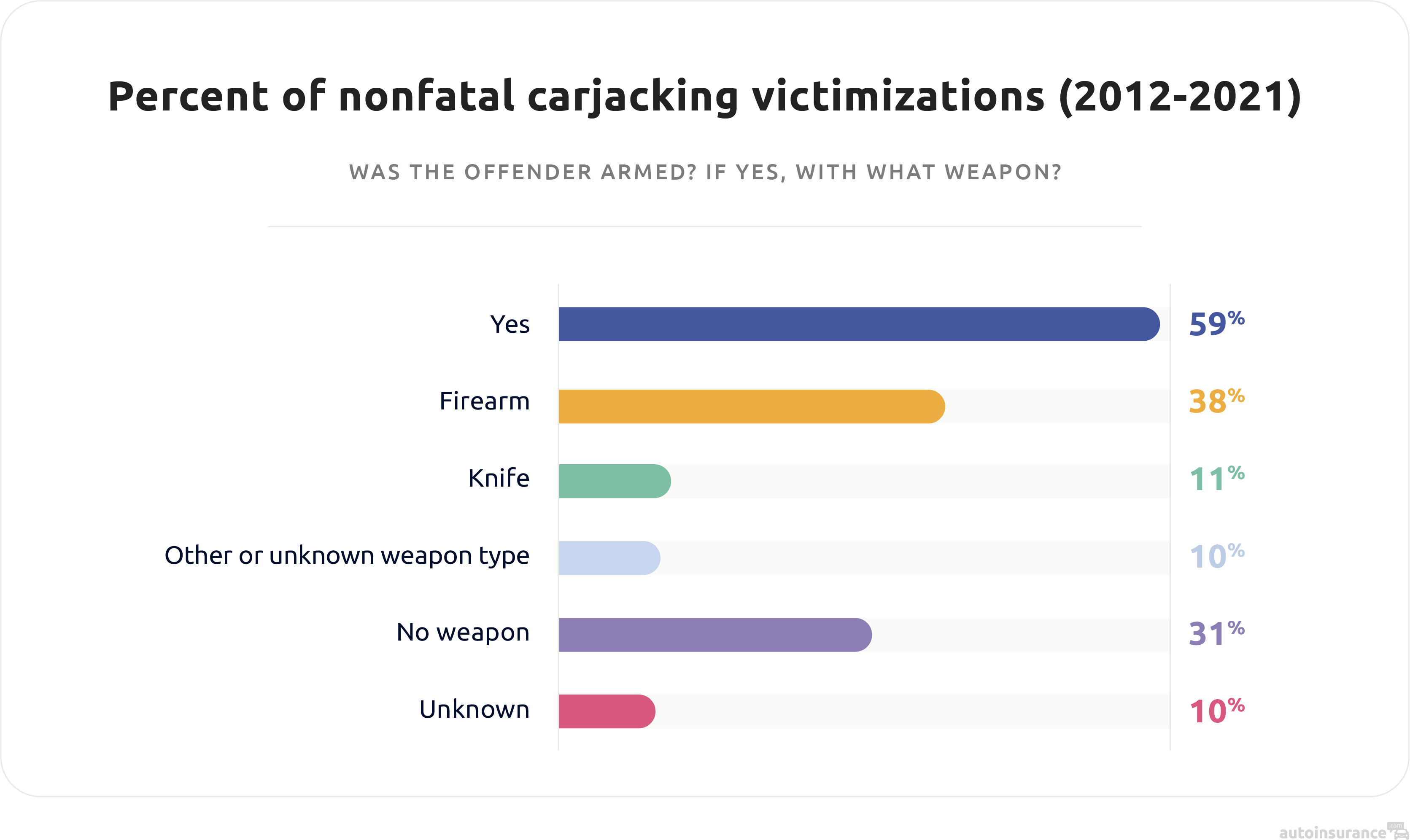 Law enforcement recommends that if you’re being carjacked, you shouldn’t resist. To avoid physical and verbal altercations, simply give up your car and flee the scene.3 While most victims attempt to resist the offender (53 percent), 47 percent follow law enforcement’s guidelines.

Most of the time, the offenders don’t injure their carjacking victims. 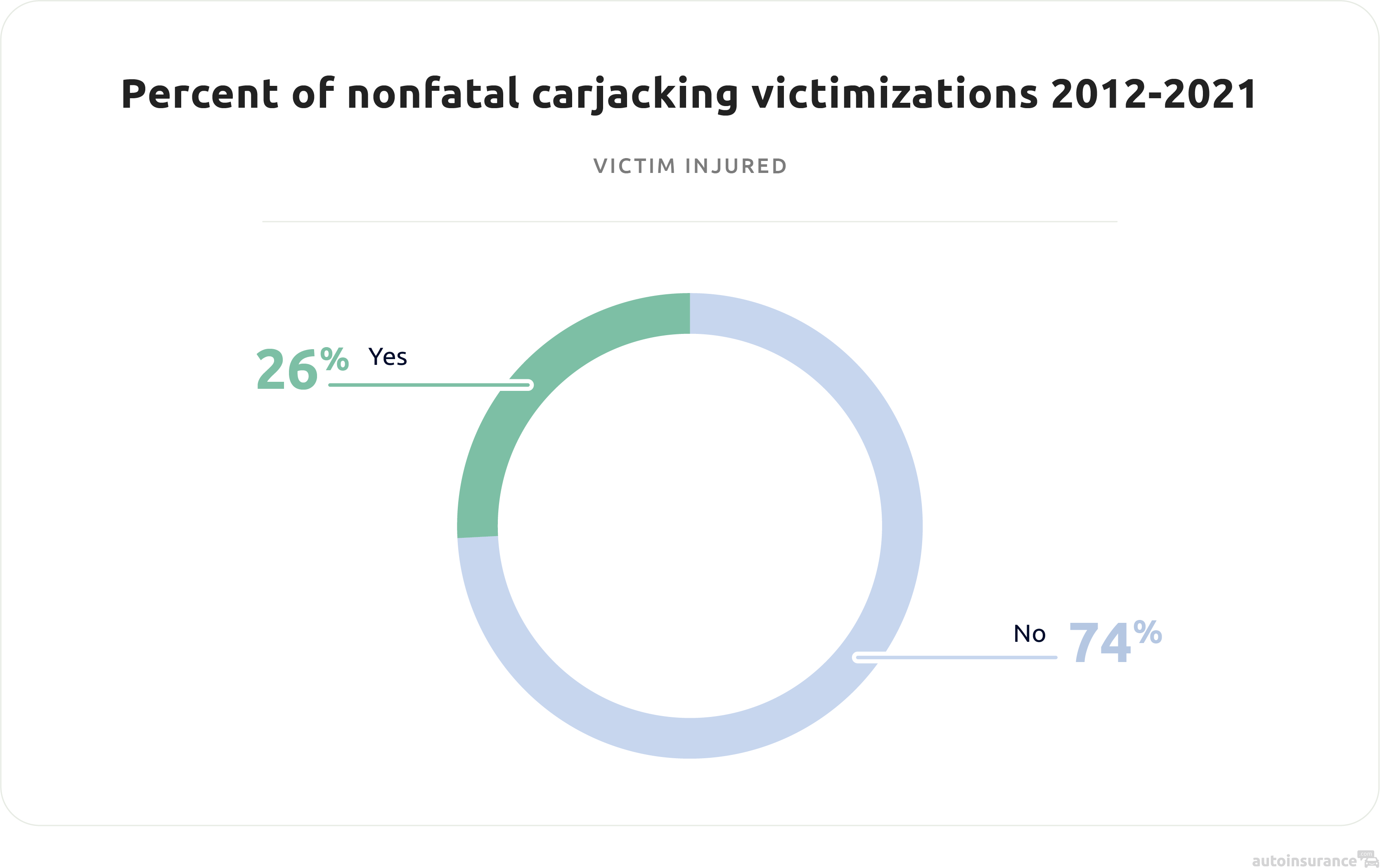 How to Protect Yourself From a Carjacking