How Much Are Car Insurance Companies Spending on Ads?

How Much Do Car Insurance Companies Spend on Ads?

While there’s no publicly available information on how much insurance companies spend on car insurance ads specifically, we did find data on their total ad spend.

Is advertising effective? The short answer is yes. With revenue data from three major insurance companies — State Farm, Nationwide, and Farmers — we calculated that for every dollar they spent on advertising, they got back $296 in revenue.

Keep in mind that this revenue was for all property/casualty insurance, which includes car insurance along with homeowners, personal liability, watercraft, and inland marine insurance.

It’s pretty mind-boggling how expensive commercials, print ads, billboards, and digital ads are. However, the insurance industry only made up 6 percent of all digital ad spending in 2021, according to eMarketer. Again, this includes all types of insurance, not just car insurance companies.

A History of Car Insurance Advertising

If you don’t live under a rock, you probably recognize the car insurance mascots as much as you do an aunt or uncle. 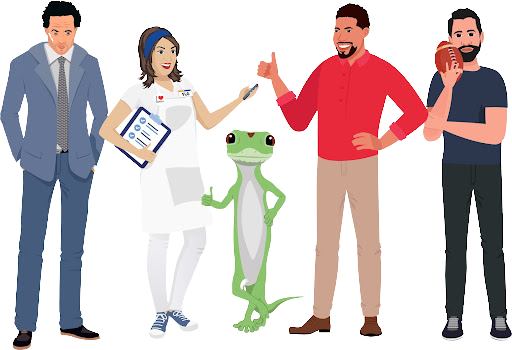 Jake from State Farm, Flo from Progressive, the ubiquitous GEICO gecko — these characters introduce us to brands that would otherwise seem very similar to each other, offering standard personal auto insurance policies for liability coverage and beyond.

But before there was Flo, car insurance commercials weren’t so funny. They were serious cautionary tales, testimonials from satisfied customers, and the like. Insurance was considered a solemn business, as it deals with the effects of at-fault accidents, which can be costly and dangerous.

Now, insurance companies lean into the humor that started with the GEICO gecko in 1999. An advertising agency called The Martin Agency invented the renowned reptile to reinforce GEICO’s name, which many people do not know is an acronym for Government Employees Insurance Company. Since the success of the gecko, the company has debuted the cavemen (which turned into a short-lived sitcom) and the infamous rhetorical questions.

But can comedy sell something as important and practical as car insurance? The answer is yes. Pre-gecko GEICO had only 2 percent of the market share4, making it the eighth most popular car insurance provider in the U.S. But as of 2020, GEICO comes in at No. 2 behind State Farm, with a total 14 percent of the market share. Naturally, other companies have followed suit with characters such as Progressive’s Flo and Allstate’s Mayhem.

Another case study is Progressive. In 2007, Progressive had little brand recognition, to the point where people often confused it with Progresso Soup. But after working with the Arnold Worldwide ad agency, it debuted the superstore idea with iconic cashier Flo in 2008. The actress who played Flo, Stephanie Courtney, was a graduate of The Groundlings, a sketch and improvisational comedy troupe and school based in Los Angeles. The commercial soon became a recurring ad sitcom, making Flo a household name. Who says improv can’t be lucrative?

Like the GEICO gecko, Progressive’s funny ads had a huge effect on its business. From 2008 to 2018, its revenue more than doubled from $13.6 billion to nearly $30 billion.5

For this report on car insurance advertising, we compiled third-party data from these sources: