Fifty-four percent of car shoppers say price is a top factor in their purchase decisions.

Over the last several months, car shoppers have been frustrated by supply chain issues that kept vehicle inventories low, while rising demand has sent auto prices sky-high. As COVID-19 cases have dropped off, consumers have resumed their workplace commutes and vacations with enthusiasm, and industry insiders predict new auto sales will continue to grow through at least 2025.

At the same time, soaring inflation and high gasoline prices are reshaping the priorities of those in the market for new wheels. Today, buyers are looking for efficient cars to help them navigate an uncertain economy.

To assess how current economic conditions have influenced car purchase decisions, we asked 500 prospective automobile buyers about their preferences, patience, and willingness to compromise in the search for their next set of wheels.

The clamor for new cars is currently outpacing production, thus leaving dealerships understocked and auto prices in the stratosphere. Consumers may be frustrated, but overall they remain undeterred in pursuit for new vehicles. Among the prospective buyers in our study, more than half were “very likely” to purchase a vehicle in the next six months. Most said they wanted a new model and about 1 in 3 hoped to buy pre-owned cars. 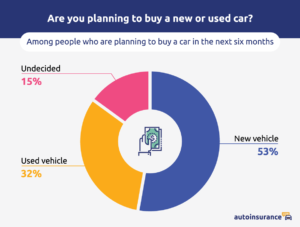 No matter what car they desire, shoppers should prepare for sticker shock. New autos have never been more expensive, and used cars aren’t much cheaper: A depleted supply of pre-driven cars has boosted their sticker prices by $10,000 or more. Our research indicates that the average budget for prospective used-car buyers may not cover typical vehicle costs. 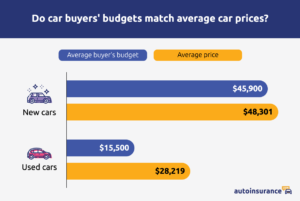 Only 33 percent of new car shoppers and 11 percent of those seeking used cars have budgeted enough to cover average current prices. Of course, pricing varies widely depending upon a car’s make, model, condition, age, and added features. To better assess consumers’ wants, we asked about the primary factors and features influencing their purchase decisions.

Feeling the pinch of inflation and rising prices at the pump, consumers face a new reality as they shop for cars. Though prices are up, buyers are hopeful about finding vehicles with advanced technology features and safety systems. However, nothing was more important to car shoppers than price and efficiency.

More than three-fourths of car shoppers said vehicle price or fuel efficiency would be a top factor in their buying decisions. In fact, vehicle price and fuel efficiency were more important to buyers than vehicle make, model, or safety features. Maintenance expenses and insurance costs also weighed heavily for many.

Both new and used-car shoppers had similar priorities with two notable exceptions. Used car shoppers were much more likely to say the price would be a critical deciding factor (65 percent) than new car shoppers (46 percent). Additionally, those in the market for new cars were twice as likely as used-car shoppers to prioritize vehicle safety ratings when choosing a car (46 percent versus 23 percent).

Purchase priorities were also consistent regardless of buyer age, but there was a difference regarding car insurance. Since younger drivers tend to have higher insurance costs, people under 30 were twice as likely to name car insurance costs as a top deciding factor than those aged 50 or older.

Seventy percent of buyers said they would likely get an auto insurance quote on a car before buying it. Additionally, 2 in 3 people planned to reduce auto insurance expenses by bundling policies with other coverage (home, life, and health insurance were the most common pairings).

With electric vehicles (EVs) now widely available, 1 in five shoppers also cited fuel/engine type as a primary factor when choosing cars. Those looking for cars with a specific type of engine were split evenly between electric/hybrids and gas-powered engines. This growing EV popularity is documented in current sales numbers and surfaced again when we asked about preferred features.

We asked shoppers to identify the specific features they desire most in their new cars. We divided features into four categories: engine and efficiency, technology, interiors, and safety.

Most Sought-After Engine and Efficiency Features

Whether motivated by rising gas prices or the rise in global temperatures, many of today’s car shoppers are looking for electric or hybrid-powered motors in their next vehicle. Nearly half of respondents (47 percent) named electric or hybrid power as one of their three most-desired engine features.

However, many other shoppers said gas-powered engines were essential in their next car, proving not everyone is on board with electric cars. More traditional amenities like automatic transmission, AWD/4WD, and cruise control proved popular for current car shoppers.

With astounding technology already in their pockets, drivers want to be able to integrate their phones with their cars. Bluetooth connectivity and USB chargers were popular for linking devices and keeping them fully charged while driving.

Navigation systems were the most-desired tech feature, but skepticism about self-driving cars kept autonomous steering near the bottom of the list. It appears that motorists still want to keep their own hands on the wheel and remain in control of everything happening in their cars. Learn more about auto insurance for self-driving cars.

Engineering and technological advancements have made modern autos progressively safer. Car buyers are seeking cutting-edge features to protect their families on the road such as:

Backup cameras are the most sought-after safety feature, proving so effective that they’ve been mandatory on new autos since the 2019 model year.

Other popular safety options (like blind-spot monitoring, automatic headlights, and ABS) can protect precious cargo and earn drivers additional insurance discounts. However, the electronics they require are primarily to blame for the production delays we’ll discuss below.

Are the Most Sought-After Features Worth Waiting For?

These most popular factors and features reveal car shoppers’ ideals in a world with all choices available. Unfortunately, limited availability means many hopeful buyers may need to abandon some preferences to avoid interminable delivery delays.

Buyers forced to sacrifice options should prioritize the most crucial safety features over mere comforts and conveniences. Automatic headlights, independent climate zones, heated seats, and fast USB charging are nice-to-have features but are not considered essential by auto experts. Shoppers should also think practically – navigation systems are redundant now that nearly everyone has a smartphone with map apps.

Those unwilling to compromise and make tough choices may face very long waits.

Buyers Are Prepared to Wait for Their Dream Cars

Supply chain issues have hobbled automobile production, primarily due to semiconductor chip shortages. Acres of cars sit half-built, and delivery delays are so common that automakers offer buyers special gift packages to appease them as they wait for their vehicle to arrive.

Rather than shopping for and taking a car home on the same day, most new-car buyers will reserve unbuilt units and wait for their cars for two to 12 months. Delivery time can be trimmed if shoppers are more flexible in their preferences, but we found consumers were willing to wait for the features they wanted most in a car.

Half of car buyers are prepared to wait four months or more to secure their most-desired features, and one in 10 would delay their purchase an entire year.

How Long are Buyers Willing to Wait for Their Most-Desired Features? 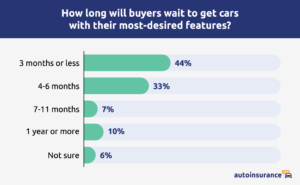 Demand remains high for both new and used vehicles, and EVs are likely to become even more popular due to incentives in the Inflation Reduction Act.

Despite indications that the chip shortage is ending and American manufacturing is gaining steam, the semiconductor supply crisis will extend through next year, likely. The recently signed CHIPS Act will boost domestic component production but won’t be online for another few years.

With manufacturers scrambling, customers waiting, and auto markets in disarray, finding a vehicle is more costly and stressful than ever. Patience will be key for car shoppers as they face long delays and difficult compromises.

Buyers who want economically priced vehicles or cars with excellent fuel efficiency may need to sacrifice warm leather seats and the perfect paint color. In today’s market, buyers may not be able to get their fully-loaded dream car without a long wait or an eye-watering price tag.

In August 2022, AutoInsurance.com conducted an online study of 500 people in the U.S. who plan to purchase vehicles in the next six months. Fifty percent of the respondents were male and 50 percent were female, ranging in age from 18 to 77 with a mean of 38.